Home Gay Life Olly Alexander reveals ‘the flag we shouldn’t be proud of’ this World... 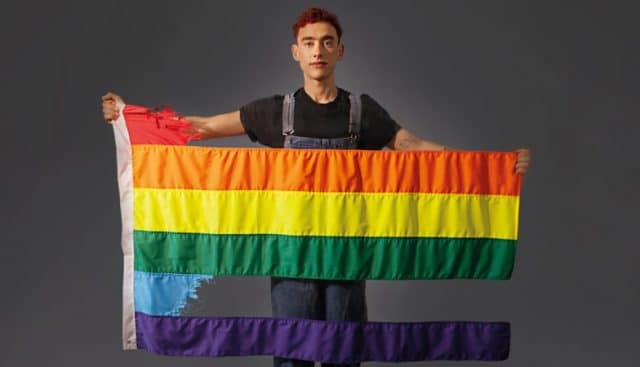 The statistics show that LGBTQ people are more susceptible to mental health issues than heterosexual people due to a number of factors, including oppression, discrimination and inequality.
Today marks World Suicide Prevention Day and Gay Times has teamed up with Years & Years frontman Olly Alexander for a new campaign to encourage LGBTQ youth to discuss issues surrounding their mental health more openly.

In a call to action, Olly Alexander holds The Flag We Shouldn’t Be Proud Of – a reworked version of the iconic Pride flag with two of its six stripes missing.

Those missing stripes represent the two in six LGBTQ youth at risk of taking their own lives due to issues surrounding shame, bullying, stigma, discrimination, dysphoria, anxiety and depression.

“There’s such a stigma around mental health that stops us from speaking out,” Olly told Gay Times. “In the workplace, in education, or even at home, it can feel difficult to express what you’re going through in the first place. Tackling that stigma is one part of it.

“I also think we have to have the actual services and provisions for LGBTQ people, because they are quite slim on the ground. The things that we can do to help that situation is to be on our local representatives so they are not defunding or shutting them down.”

Speaking about his advice for LGBTQ youth who are struggling with mental health issues, Olly added: “My advice is usually that you are not alone, and you don’t deserve to have to go through this by yourself. You deserve to have help and support if you need it.

“Getting to a place where you feel able to ask for help is probably one of the hardest battles in the first place – and that’s different for everybody – but I’d encourage people to reach out and to make use of support networks. Whether that’s friends, family, anyone close to them, or even if it’s a telephone service.

“There are lots of different options available if you are struggling, even though it can feel like there are none. You are not alone. There are ways you can get out of this, and you just want to feel empowered to make the choices to pursue that.”

The two missing stripes from The Flag We Shouldn’t Be Proud Of include red and blue, which traditionally symbolise ‘Life’ and ‘Harmony’.

Putting his full support behind this campaign, Mayor of London, Sadiq Khan said: “I’m proud that London is a symbol of diversity and progress, but we know too many young LGBTQ Londoners experience poor mental health and discrimination. 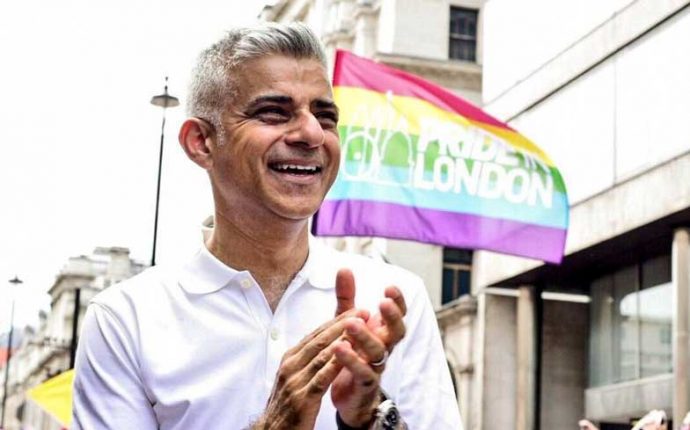 “We need to do much more and I’m delighted to back Gay Times in trying to raise awareness of LGBTQ youth suicide.

“The wellbeing of our young Londoners is vital if we are to build a healthy future for our capital, and I’m determined that all communities feel able to speak openly about their mental health and access the support they need.”

Gay Times has joined LGBTQ helpline Switchboard in urging anyone wanting to speak to a friendly ear to reach out and use their services. You are not alone.

“As we know, issues surrounding mental health affect LGBTQ people disproportionately, and World Suicide Prevention Day is an opportunity for us to reflect on the vast work that still needs to be done within the community,” said Gay Times editor William Connolly.

“We need to bring a heightened sense of urgency to our approach to mental health so that queer people everywhere can live their lives happily and freely, without fear or oppression.

“As the oldest LGBTQ helpline charity in the UK, Switchboard have long provided an essential lifeline to LGBTQ people up and down the country and we’re extremely proud to amplify their support network through this campaign.”

If you would like to contact Switchboard you can do so via the online portal at Switchboard.lgbt or their helpline on 0300 330 0630. 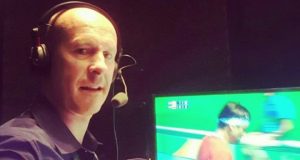 Ervin Brue
3
Ah, the kiss cam. That cute, time tested stunt seen at sporting events around the world to keep people entertained during slow moments between the... 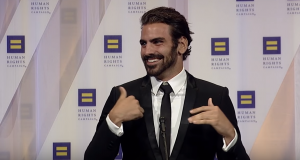