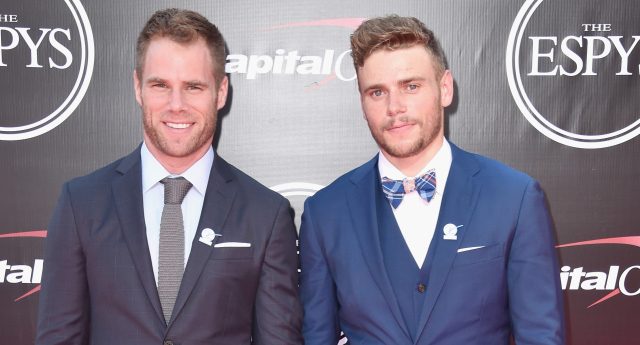 Olympian Gus Kenworthy and actor Matthew Wilkas have opened up about coming out and the beauty of their relationship.

Talking to OUT, the couple spoke about how they met and how Kenworthy came out by announcing his relationship to Wilkas.

“I wrote him this really long message on Instagram,” said the Olympic free skier.

“I said, ‘Hey, I think you’re really funny, and you seem really sweet, and I’ve been enjoying following you on Instagram, and actually I’m in the closet right now, and I’m coming to New York in a couple of weeks if you want to get a coffee or something’”.

The two agreed to meet for coffee – but Wilkas was going through a break-up and they didn’t meet for another year.

When they finally met up for dinner, on Kenworthy’s birthday, things went from 0-60 and soon enough they got together.
Kenworthy said: “The conversation was really easy, and we kissed outside the restaurant after dinner, and then he walked me back to my hotel and went on his way.

“We texted throughout the night, and the next day he came to the hotel to hang out again. I was actually there with my mom — but she was out wandering around, so Matt and I hooked up for the first time.”

Months later, the two finally confessed their love to each other in Connecticut while Wilkas was doing a play. Kenworthy visited Wilkas as a surprise.

Wilkas said: “We were on the couch kissing, and I’d been sitting on the words for a long time, the feeling of it, and I just said, ‘I have something I want to say, but I’m really scared to say it to you,’ and I started crying.”

Kenworthy added: “I could feel his heart beating and sensed his energy, and he turned to me and said, ‘I want to tell you something, but I’m scared,’ and I just totally hijacked it and said, ‘I love you.’ And then he said it back, and he was crying, and I was crying. It was really sweet.”