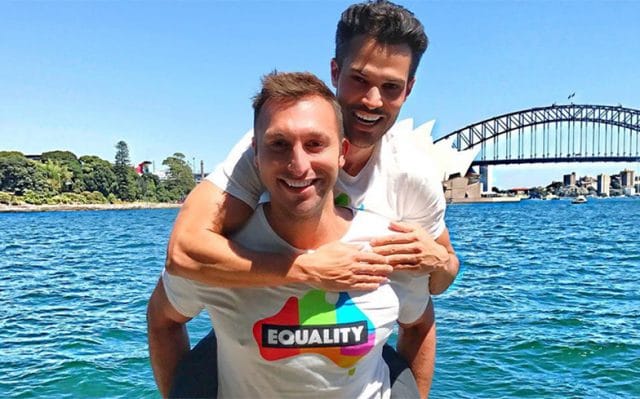 The openly gay, gold medal-winning icon has called on his home country’s Prime Minister Malcolm Turnbull and his Liberal party to approve of marriage equality, an issue that’s been heavily debated this year.

Ian made the comments during an appearance on the Morning Show – his first television interview with partner Ryan Channing – on Tuesday, where he called the government’s plebiscite a “stalling tactic”.

“We don’t have the right to get married, which is quite apparent at this stage, and I find what’s going on in this marriage equality debate disappointing,” he said.

“The plebiscite, the postal plebiscite – whatever it is – it is just a stalling tactic that the government will use because they don’t want to get on with doing their job on this.

“It will have to come to a vote in parliament and we are waiting for that to happen.”

When asked if he and his partner Ryan want to become the ‘face’ of same-sex marriage in Australia, Ian said: “For us, we haven’t been waiting for this as long as what so many other people [have].

“You read a story about a couple who want to basically be able to express their love through marriage before they die, and that’s what we’re up against.”

Australia’s ruling Liberal party was re-elected last year after pledging to hold a plebiscite (a public vote) on marriage equality, however it was blocked by the Senate following criticism it would be expensive and not legally binding.

But during a special meeting on Monday, the party announced that they will once again attempt to persuade the Senate to endorse a national plebiscite – if that fails, they will turn to a postal vote.

LGBT+ activists have argued that a parliamentary vote is the way forward, as a plebiscite will cost an estimated $160 million and will likely give homophobes a platform to voice hate – which it already has.

Last year, Kylie Minogue and her ex-fiance Joshua Sasse famously stated that they wouldn’t tie the knot until same-sex couples could do the same, and introduced the highly-publicised Say ‘I Do’ Down Under campaign.

Their campaign was backed by a number of celebrities including Natalie Imbruglia, Margot Robbie, Jake Shears and even Dolly Parton.

Celebrities aren’t the only ones to show support for equality in Australia, as Ben & Jerry’s recently banned customers from buying two scoops of the same flavour until same-sex couples can marry.