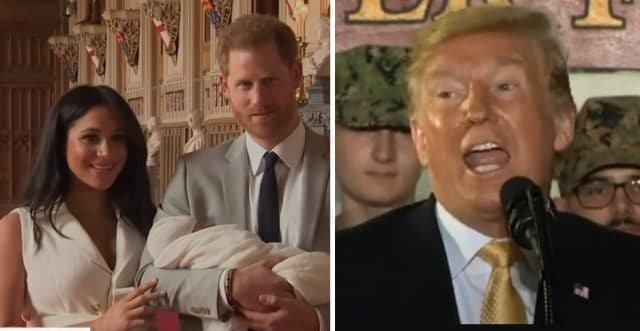 President Trump said in a new interview that he was surprised that Meghan Markle, Duchess of Sussex, made “nasty” comments about him.

Speaking to British tabloid The Sun just days ahead of his state visit to the United Kingdom, Trump said he was not aware that the Duchess had called his politics “divisive” and “misogynistic” during his 2016 presidential campaign. She had also told “The Nightly Show with Larry Wilmore” that she would move to Canada if he won the presidency.

The president said he hopes Markle, an American-born actress, will succeed as a member of the royal family.

Trump is scheduled to meet with a number of members of the royal family during his visit to the UK next week, including Queen Elizabeth, Prince Charles and Camilla Parker Bowles.

Markle’s husband, Prince Harry, Duke of Sussex, will reportedly join Trump for a private lunch, as will Prince William and Duchess of Cambridge Kate Middleton.

Markle, who recently gave birth to a baby boy, will still be on maternity leave during the visit and will not be available to meet with the president.

Trump told The Sun that he “didn’t know” he would not be meeting Markle, and said: “I hope she is OK.”