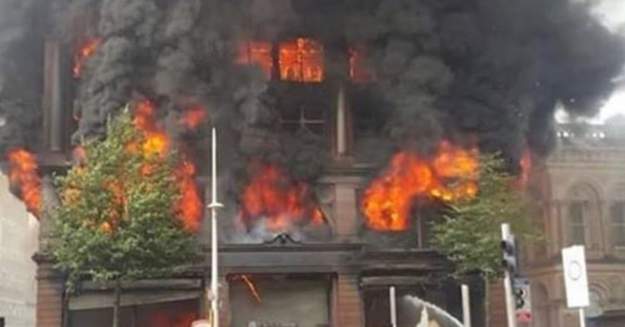 Homophobes and the religious intolerant are using a recent fire to spread homophobic rhetoric.

On Tuesday (August 29), a sudden blaze broke out at the Primark building in Belfast, North Ireland. The 233-year-old building went up in smoke, but 80 firefights fought to make sure that the fire didn’t spread to any other buildings, according to Metro.

While the building didn’t entirely burn down, experts are currently investigating what caused the fire and if the building’s structure is damaged beyond repair.

As that is going on, homophobes have already taken to the internet to use this as an excuse to share hateful words. How do they figure the fire is in anyway related to LGBTQ people? One store window included Pride merchandise. 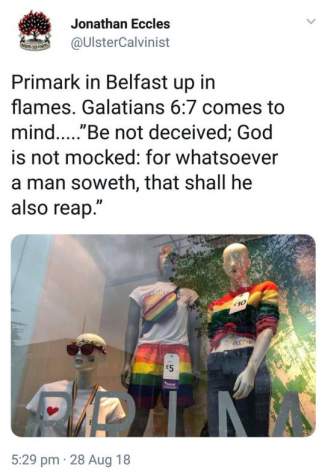 “Primark in Belfast up in flames,” wrote one person in a now deleted Twitter post, “Galatians 6:7 comes to mind… ‘Be not deceived: God is not mocked: for whatsoever a man soweth, that shall he also reap.’”

“@Primark supported wickedness via it’s shop window a few weeks ago in Belfast,” wrote another.

A third remarked, “Reminds me of our Trinitarian God who burnt not just a shop, but a whole city to a crisp.’” 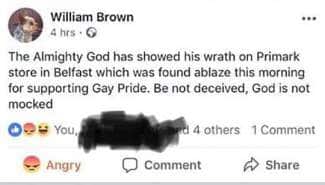 In response to all this, the Northern Ireland Humanists group released the following statement:

“We have already noticed comments like ‘you reap what you sow’ in response to the Primark Belfast building having an extremely destructive fire.”

“This is because Primark had created a rainbow window presentation in support of Pride Belfast this year. ‘We know this is not the feelings of most Christians, but we would ask you, religious or not, to call out this homophobic rhetoric where you find it.”

“We hope those employed by “Primark are being helped while out of work. And we also hope the building will be rebuilt as it is one of Belfast’s most beautiful.”