Home Gay Life Only a quarter of straight Canadians are fine with gay couples kissing... 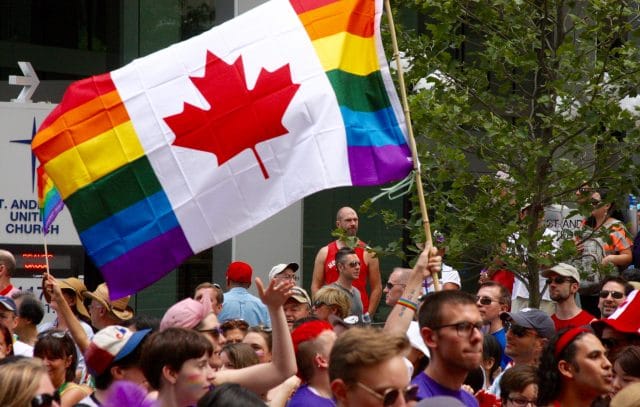 LGBTI equality in Canada still has a long way to go despite recent progress.

A survey done by the a Canadian anti-bullying foundation has found only 27% of straight respondents were comfortable with same-sex couples kissing in public.

The study was done as a base for the government and LGBT organizations to base their education and health plans on.

81% of LGBT respondents said they have had ‘moments of despair’. The percentage for trans people is higher at 98%.

These percentages are a sign of people at risk of developing mental health issues.

The survey took place between January and June of 2017. People aged 15 and over could take part.

The entire study is 400 pages long. It is the largest study the country has ever done looking at sexual minorities.

The first aim of the survey was to paint a portrait of the country’s LGBT community. It would secondly look at the experiences LGBT people who were also of an ethnic minority.

Finally, it wanted to look at how straight people viewed sexual minorities in society.

More than half the members of sexual minorities feel their lives are more difficult than their straight counterparts. 80% of trans people felt the same.

Only 31% of straight respondents said they’d feel comfortable sharing a changing room with a trans person.

75% of LGBT respondents said they had been the victims of bullying as opposed to 45% of straight respondents.

Trans and/or non-binary people face more negative reactions when coming out of the closet compared to other groups in the community.

Lesbians were the most accepted in the work place.
Gay men showed the highest percentage of acceptance when coming out to their family. They were also the most likely to visit LGBT spaces.

Bisexuals and asexuals felt the least integrated in the LGBT community.