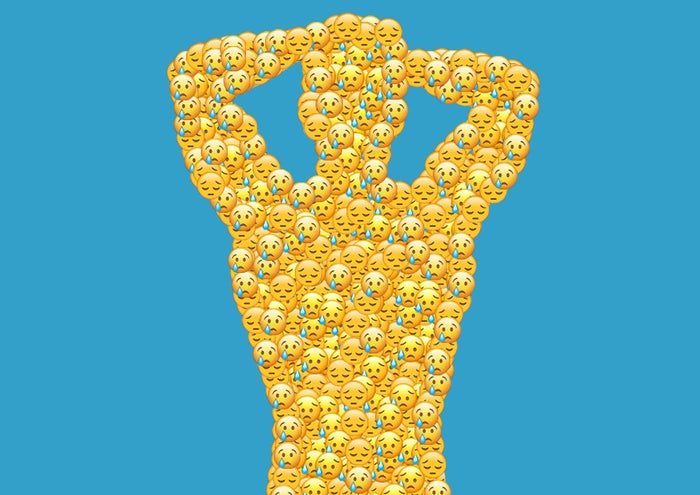 For weeks, followers of the popular gay-parenting-and-thirst Instagram account @dadsnotdaddies were perplexed. Though one-half of the Insta-famous couple, Devon Gibby, still appeared on the account with his two kids, his partner, Rob Zimmer, was nowhere to be found. The hashtag “#whereisrob” became a popular comment under many of their posts, with Gibby at first making excuses for Zimmer’s absence in captions — couldn’t make a family trip, had to work. But eventually, he acknowledged the absence, promising an explanation to come.

The eventual news was as obvious as it seemed: The couple of four years (Gibby was a divorced dad when they met) had split up. What came after, however, was far less expected: what Out Magazine described as a “breakup photo shoot,” one where there was never more than one shirt being worn between the two men.

Gibby’s caption, paired with several anguished and 50% shirtless photos of the couple, said that the pair “scheduled this photoshoot before we made the decision to separate,” and though they pondered canceling, “chose to go ahead with it and do our best to convey our situation as it is.” Later, the caption was edited to add a note that the shoot happened “while we were still together as a couple and were facing some challenges in our relationship,” and that calling it a breakup photo shoot was inaccurate.

But for those who routinely follow Instagays, a breakup photo shoot wouldn’t have come as a surprise. From mourning international tragedies to coming to grips with the 2016 election results, there’s a tradition of removing your shirt and grieving through thirst on gay Instagram. Look through the #instagay hashtag after any sort of tragedy and you’ll find evidence that beautiful gay men will find their way through any hardship — and they’ll usually do it shirtless. It’s just another preposterous part of living in 2019 — one that’s quite telling about how quickly we accept new absurdities as our reality.

The first instinct upon seeing a Grief Thirst post is to laugh. How could it not be? What other reaction is appropriate when you see a self-described “Dancer/Actor/Singer/Model” post a photo of his butt — a regular feature for Instagay Chad Sapp (NSFW, to say the least) — with an “I Voted” sticker on it, paired with a hilariously self-serious caption about why he still posted it despite the election results?

The same goes for Brenton Goldsack’s recent post that mentioned the bombings in Sri Lanka that killed nearly 300 people — paired with a photo of himself shirtless. “I was there last year and had a bad vibe a lot about a broken country,” he wrote in a now-deleted post on a now-deleted account. «Thoughts and prayers and positive energy being sent.» When called out on the inappropriate pairing, Goldsack said, “Two birds one stone,” and defended the photo because it showed his tattoo that he got in Sri Lanka.

You can’t make it up. And it’s not just tragedies that get the shirtless treatment: Consider how Queer Eye star Antoni Porowski celebrated Mother’s Day last week. Even the most famous of Instagays are still Instagays, after all.

A recent episode of The Other Two, Comedy Central’s buzzy new sitcom, earned praise throughout queer circles for its depiction of Instagays — not because it exaggerated them, but because it presented them as they present themselves. For those who don’t live and play in Instagay circles, it felt like the kind of mocking we all do on Twitter and in our group text threads every day.

Some don’t see the fun in the mockery, and their responses lean toward smarminess — the argument being that making fun of the beautiful men of Instagram for their posts is fostering negativity and tearing our own community apart. This, of course, overlooks the drastic disparity in power that’s often in play, between the well-built Instagram stars who’ve learned to monetize their bare chests and draw massive followings, and the rest of us jeering from the cheap seats. Playfully mocking a Grief Thirst post from a fraction of the followership is the very definition of “punching up.”

Instagram is an economy like any other. I think a lot — more than I should, probably — about the bio for one particularly popular Instagay, Kyle Krieger. “Being popular on Instagram is like being rich in Monopoly money,” it says. And yes, on some level it’s true that fanbases like Kyle’s 2-million-plus followers don’t directly translate into financial gain. But with following comes money and power: ad deals, invites into influential spaces, business opportunities. Their posts might be laughable at times, but shirt-free Instagays are like any other influencers online: more powerful than you’d think, and just as open to criticism.

Even the @dadsnotdaddies breakup photo shoot has led to new opportunities. One half of the couple, Gibby, posted teases of a “new direction” for his account, eventually unveiling a whole new handle — @dadndaddies — in a video post. Suddenly, this breakup is a rebranding opportunity, one that will likely bring all-new attention and audience (and, yes, likely new sponsorship deals).

Trying to fight the flood of thoughtful shirtlessness is a losing game, though: Our mockery isn’t going to turn the tide on Grief Thirst. It’s inevitable that the way we make and consume media will bleed into the way we process difficult times. Performative grief has been around for far longer than Instagram. It just now involves fewer shirts.

Besides, these posts can be helpful. For one, I know the 2016 election result was easier to process while I was laughing at dumb Instagram posts. Humor has long been a salve for the bereaved, after all. When the world goes crazy, sometimes the only thing you can do is laugh at a beautiful man in deep contemplation, shirtless.