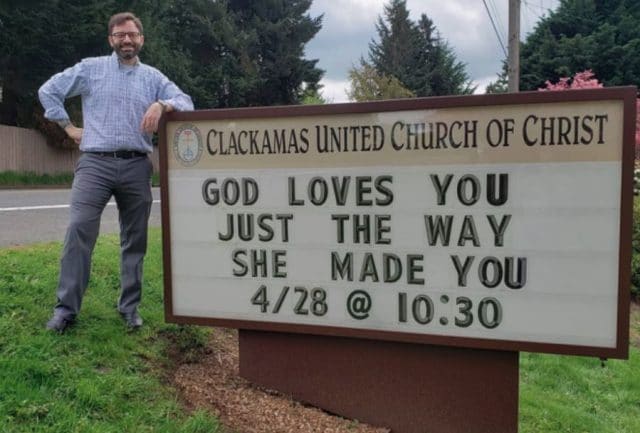 Thousands of social media users have been drawn to the progressive political messages being shared by Ericksen’s Clackamas United Church of Christ in Milwaukee, Oregon, showing support for Muslims, African Americans and the LGBT community.

“God loves you just the way she made you,” reads one sign shared on social media.

“Our transgender siblings have heartbeats,” read another sign shared last week in response to an Alabama anti-abortion bill that prohibited the termination of a pregnancy after a heartbeat could be detected.

“Wow some impactful, loving church signs for once! I love it and thank you!” One social media user wrote in response to the post. “God bless you. This is kind of healing, restorative work churches need to be focused on,” posted another in response to the sign.

“Harriet Tubman deserves to be on the $20. End White Supremacy,” the pastor posted in a recent image.

Ericksen told CNN he had been inspired to post the messages in part to build up his dwindling congregation. “The best way to do that is with this sign,” he explained. While the messages may have doubled the number of worshippers sitting in the pastor’s pews on a Sunday, the effect on further afield has been perhaps even greater.

“We’ve gotten hundreds of messages, including from transgender people who say they wish they had a church like this in their area,” Ericksen said. “People are thirsty to know they are loved,” he added. “In every area there are pockets thirsting for this message of radical inclusion.”

The pastor explained there has been virtually no negative reaction to the signs in Oregon, but perhaps unsurprisingly opposition has sprung up online. “Jesus wasn’t neutral he sided with the poor, sick and immigrant. Be like Jesus,” one sign placed in front of the church read. “This Church of Christ kicked Jesus out years ago! So sad!” one social media user responded. “I would be curious to see what scripture backs up that ‘entire‘ statement,” wrote another.