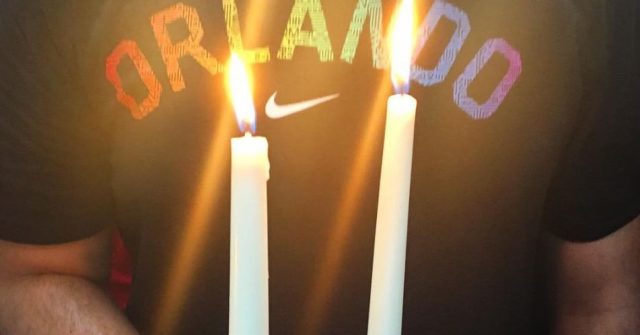 Today marks the third anniversary of the Pulse nightclub shooting. So in commemoration of those lost and those whose lives were forever changed, we’re revisiting this article from 2016,

With early-morning swim workouts during the week, a normal Sunday provides Austin Olivares a rare chance to sleep until 9:30 or 10 a.m.

But Sunday, he awoke around 8 a.m. from his phone buzzing with texts and alerts. Family and friends from all over sent messages to check on him, because Olivares, who is gay, lives in Williamsburg, Florida, a suburb of Orlando.

After consuming the news of the massacre that occurred at the gay bar Pulse a few hours earlier, the 22-year-old Olivares responded to the messages to let people know he had not gone out that night.

Several messages came from his teammates on the Lindenwood University swimming team, so Olivares sent them a mass Facebook message. Dozens of teammates responded to the message and said they were glad to hear he was OK. The response that touched him the most came from rising junior Sam Stapleton.

“Homie, I know you’re technically safe, but I’m just glad you weren’t out last night,” Stapleton said in a Facebook message. “I’m so glad you’re alright man. I don’t know what we would do if something were to happen to you.”

“I was very touched by it,” said Olivares, who will be a senior captain next year at Lindenwood in suburban St. Louis.

Olivares, who moved to Williamsburg with his dad before eighth grade and attended Dr. Phillips High School in Orlando, spent Sunday mostly responding to messages he received and contacting friends to check on them. From what he learned as of Monday, no one Olivares knew was at Pulse that night.

Pulse was the first gay bar Olivares went to in Orlando, and the night of the shooting was Latin Night, an additional overtone for Olivares whose dad, Omar, was born in Puerto Rico.

With no direct connections to the victims, Olivares adopted the role to comfort his friends that lost someone close to them.

“I was kind of in a gray area mentally and emotionally,” Olivares said. “I wasn’t sure how really to react, because it was an attack on my community, but at the same time, I hadn’t lost anybody so I felt like my role is to be more supportive.”

It started with his friend Brandon Powers, who stayed at Olivares’ mom’s house Saturday night. Olivares and Powers, who is gay, planned to play Powers’ new video game “Overwatch” on Saturday night and Sunday, but waking up to news of the shooting, they both fell into a haze and never played the game Sunday.

Early Sunday afternoon, the 49 victims grew personal when Powers learned his friend Cory Connell had been shot in the stomach and shoulder. Powers and Connell had been close friends in high school. Powers wrote in a Facebook post that the pair tried to get together recently, but their schedules had not aligned. Powers spent time on the phone with his boyfriend and talking to Olivares throughout that afternoon.

“He was pretty shaken up. He wasn’t saying much,” Olivares said. “I told him, ‘If you just want to sit and reflect on what’s going on, that’s fine, or if you want me to just listen to what’s going on, that’s also fine.’ I tried not to press too much, but I really just wanted to let him know and understand that he had a friend there and someone he could talk to get through it.”

Powers learned Monday morning that Connell was one of the 49 victims.

Around 7 p.m. Sunday, Olivares drove Powers home then headed to meet friends for a vigil at Ember, an Orlando bar that Olivares said usually has a significant gay clientele on Sundays. Olivares felt fear joining other members of the lesbian, gay, bisexual and transgender community on the same day so many were killed at a gay bar, but after he parked and started walking toward the bar, he saw police walking around the block, which calmed his concerns.

Early in the night, nearly everyone held a candle in memory of the victims. Throughout the night, he saw people hugging each other, sitting on the ground talking, and crying together. The longer Olivares stayed at the bar, the stronger he felt to be surrounded by LGBT men and women.

“As a community, we all needed to be together and to stand together and be there for one another,” Olivares said.

Olivares stayed at Ember until about 1 a.m. Monday morning, and he heard many stories from people about friends who died in Pulse. He came away with stronger pride in being a gay man.

“For a long time, it was hard to come to terms and accept my sexuality,” Olivares said. “When I came out, just before I graduated high school, it was one of the most amazing things I’ve ever done for myself. I felt like I owe it to myself and to the community and the people who aren’t afraid to be themselves, I felt like had to be out and supportive in some way. I was afraid [to go to Ember], but I’ll be damned if I’ll let someone try and bully or terrorize us back into a corner or back into the closet.”

Monday provided Olivares his first chance to be alone and think about the massacre. He didn’t see much news Sunday, so Monday, he spent time watching CNN, reading news stories, and thinking about how fortunate he was to not have gone to Pulse that night.

“I still wish this had never happened, but if there was a silver lining, I would say it’s the overwhelming support — not just from the community here and the citizens of Orlando but from people all around the world,” said Olivares, who singled out particularly being touched by images from a vigil in Seoul, South Korea. “I feel it’s really been a testament to how far people have come as far as open mindedness and acceptance.”

Austin Olivares can be reached by email at austinolivares2@gmail.com. You can read his coming out story.

Erik Hall is a member of the National Lesbian and Gay Journalists Association. He can be reached on Twitter @HallErik or by email using hallerik7@gmail.com.