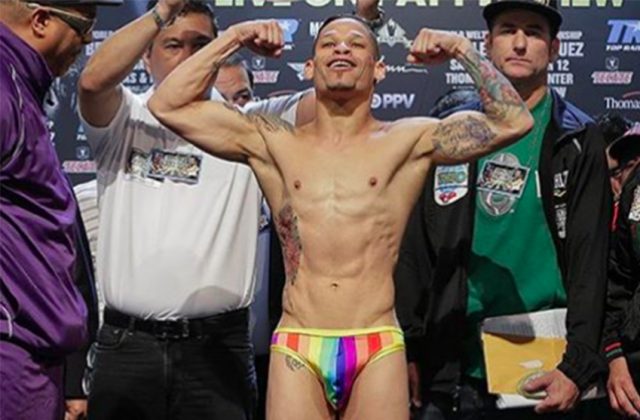 ‘I want to inspire the gay community by becoming a World Champion on Saturday’.

But while it would be a momentous achievement to be world champion, he also wants to win to inspire the LGBTI community.

‘Terry Flanagan is a true World Champion and will defend his title with everything he has,’ said Cruz. ‘However, I am prepared and ready for victory and to be crowned the new World Champion. I want to inspire the gay community by becoming a World Champion on Saturday.

‘Terry is a great Champion and a real people’s person. More importantly, he respects my life and my choices. He sees the man boxing him and that is it. Everyone has been very supportive since I came out three years ago. I have the support of my family, friends and fans. ‘When I look at my story, it makes me hopeful that more people will be inspired to come out. Right now my focus is fully on the big fight on Saturday and winning the WBO Lightweight belt.’
Cruz is already on a winning streak.

He won his last fight in July after dedicating it to the victims of the Pulse shooting in Orlando, Florida. Cruz lost four friends in the mass murder that claimed the lives of 49 people.
While he was unable to attend the victims’ funerals because of training, he has been to visit Pulse to lay down gloves and flowers at the memorial.

When the boxer came out in 2012, he said: ‘They can call me maricón, or faggot, and I don’t care. Let them say it because they can’t hurt me now. I am relaxed. I feel so happy.