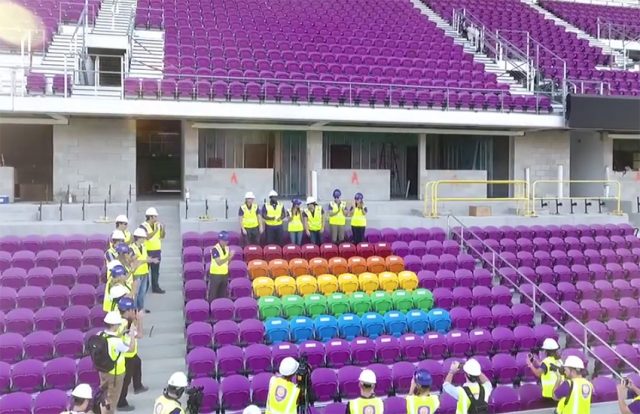 Orlando City president: ‘This sport can lift up a community and help to heal a community.’

The seats, honoring the people killed at the gay nightclub on 12 June, are in section 12 of the Lions’ new stadium set to open in March at the start of the 2016 Major League Soccer season.

‘Just over six months ago on June the 12th, there was the senseless loss of 49 lives at the Pulse Nigthclub,’ Rawlins said in a video of the private ceremony the club released.

‘And as a sports, as a community, as a soccer club, we responded to that tragedy in the very best possible way.

‘And it was my belief, I know it’s your belief as a club, that this sport can lift up a community and help to heal a community.

He added: ‘We made a commitment on that day that, which is that we would commemorate, forever, in the new stadium a memory of the 49 victims that lost their lives that day. And today we’re here to do that.

‘We’re here to commemorate and unveil the 49 rainbow seats that will sit permanently in section 12 of our new stadium as a constant reminder of the senseless acts of June 12.’

On 18 June, the Saturday after the tragedy, the Orlando City soccer club played a home game and included tributes to the Pulse victims.

The seats have been set in a prominent location and have been sold to fans with season tickets and should be occupied every game. 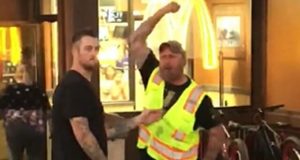 Nick Gayer
0
Another day, another racist homophobe caught on tape. This time it’s a construction worker from Idaho yelling at a group of a group of... 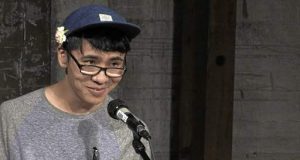 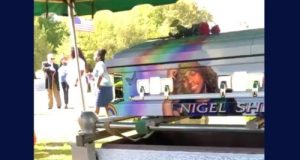