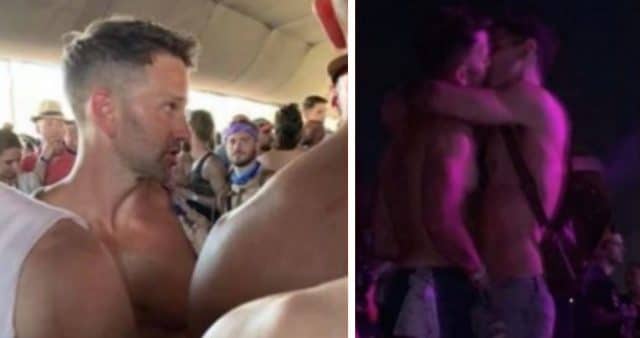 Mad Men’s Kit Williamson, who is openly gay, took to Twitter to urge former GOP Representative Aaron Schock to come out as gay after several news outlets reported that the anti-LGBT lawmaker was spotted making out with another man at the Coachella music festival.

Activist James Duke Mason took to Facebook to share photos of Schock with other shirtless gay men at the music festival.

“Normally I wouldn’t comment on something like this, but I am just infuriated by these images of former Republican (and anti-gay) Congressman Aaron Schock partying with a group of gay men at Coachella. The fact that he would think he could show his face in public, particularly when he has NEVER renounced or apologized for his votes against gay marriage, gays in the military and against anti-discrimination laws is astounding,” Mason wrote.

“My intention isn’t to out him or target him personally, but simply to point out the hypocrisy. I saw him at a recent gay social event in West Hollywood and shook his hand before I even knew who he was; he should really be ashamed of himself. And the gays who associate with him without calling him out should know better. It really is a disgrace.”

In one photo published by Queerty, allegedly shows the ex-Congressman making out with another man while shoving his hand down the man’s pants.

In response to the article, Williamson urged Schock “to not only come out but to come out against his INCREDIBLY HOMOPHOBIC voting record while he was selling all of us out in congress.”

I don’t generally support outing public figures, but his voting record tips the scales. He’s a relic of a hopefully dying age where the most self hating amongst us not only remained in the closet but ACTIVELY WORKED TO HARM those of us brave enough to live openly.

You cannot simultaneously hide in the closet and enjoy the trappings of living your life openly like making out with a dude on a dance floor. As far as I’m concerned, he’s outing himself. But he’s yet to take responsibility for the damage he’s done.

Until he does, I don’t care how many abs he has, or how many his makeout buddy and their friends have, they all disgust me equally. Just a friendly reminder that you are the company you keep.

I’m not without empathy. I’m sure it was painful for @aaronschock to deny himself for so many years in the pursuit of his career in politics. And I’m sure it’s even more painful to see people like Pete Buttigieg lapping him professionally while living a life of integrity.

But our empathy should be limited to those willing to take responsibility for their actions, and for the harm that they’ve done. And not just in empty apologies–in action. Volunteer. Work to undo the damage you’ve done. Or stay the fuck off our dance floors, queen.

Not trying to start a mob, but there have to be social consequences to working against gay rights like Schock did for a decade. If at the end of all this he can just stroll into a gay bar like nothing ever happened, what’s to stop others from following in his footsteps?

TO CLARIFY: I am all for a path to redemption. Forgiveness matters, and we need to find ways to come together—even if someone’s been homophobic. But don’t crash the party before you’ve acknowledged your mistakes.

Schock’s anti-LGBTQ voting record included a vote against the repeal of ‘Don’t Ask, Don’t Tell’ and supporting an amendment to the Constitution that would ban marriage for gays. He was awarded a zero rating from the Human Rights Campaign.

A financial scandal eventually led to his resignation from Congress in 2015.