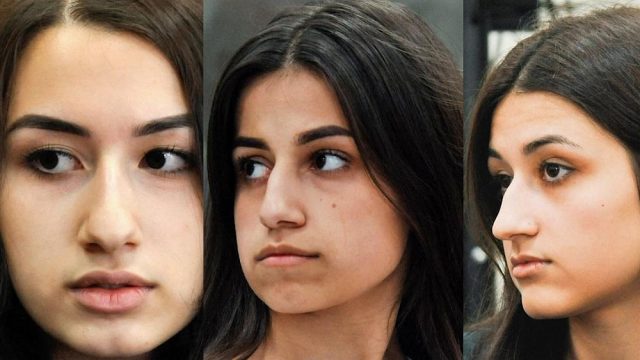 Murder charges against three teenage sisters in Russia who killed their father as a result of domestic and sexual violence have sparked outrage in the country.

Krestina, Angelina and Maria Khachaturyan have been in custody and under house arrest since July 2018, when they stabbed their father Mikhail to death. The young women reported the crime to the police and said they had acted in self-defence because they feared for their lives. They were 19, 18 and 17 at the time.

Court records showed that the girls were routinely beaten as well as sexually abused by their father.

One evening in summer 2018, Mikhail found that his living room wasn’t tidy enough, according to AP, and doused his daughters with pepper spray. That’s when the girls decided to put an end to the torture, the agency reported.

When their father later fell asleep in his rocking chair, they stabbed him with a kitchen knife and hit him with a hammer, it added.

Last month, the sisters were charged with premeditated murder, after which protests broke out in Russia, as well as in front of Russian embassies abroad. More than 200,000 people have signed an online petition urging prosecutors to drop the murder charges.

Angelina and Krestina face up to 20 years in prison, while their sister Maria faces up to 10 years since she was not an adult at the time of the murder.

Public debate and outrage in Russia

Research on Russian criminal court cases compiled by Russian investigative media outlet Media Zona showed that out of 2,500 women convicted of manslaughter or murder from 2016 to 2018, nearly 2,000 killed a family member in setting where domestic violence was present.

Media Zona is a Russian media platform that focuses on the criminal justice system. It was founded by Maria Alyokhina and Nadezhda Tolokonnikova, members of the Russian band Pussy Riot. Its editor-in-chief is Russian political journalist Sergey Smirnov.

“Unfortunately, now the law enforcement services cannot protect us”, said Ageniy in an interview with AP. “I believe that we have to learn how to care for ourselves.”

Ageniy also alleged that the police investigator in charge of her case said that she should have called the police while she was being attacked, instead of trying to defend herself.

Euronews contacted the Moscow Prosecutor’s Office but had not received a reply at the time of writing.

Domestic violence was partially decriminalised in Russia in 2017. Under the new law, offenders can get away with a fine, while the previous penalty was up to two years.

“On one hand, Russia is the last country in the Council of Europe without a specific law on domestic violence.

“On the other, a couple of years ago, a law decriminalising domestic violence came into force. So now it’s not in the criminal code anymore, but rather in the administrative code.

“This also means that any fines collected (for domestic abuse offences) are added to the state budget, and do not work to improve the system or help the women,” Rivina said.

“The role of the prosecution and justice system is to defend the victims. But they are busy solving ‘hard’ criminal cases which bring more recognition.

“Domestic violence thus remains an ‘uninteresting’ subject for both the investigators and prosecutors,” she added.

‘I could kill you and no one would stop me’

Last year, a survey published by the state-run VTsIOM pollster found that nearly half of Russian women said that they were most at risk of violence by family members in the home.

While Human Rights Watch also published a report documenting a number of cases where “a very clear case of self-defence” was not recognised as such by prosecutors and led to the victim’s imprisonment, according to researcher Yulia Gorbunova.

The report titled “I could kill you and no one would stop me”: Weak State Response to Domestic Violence in Russia, highlighted what it said were failings in the justice system while dealing with cases of domestic violence. Its findings were based on in-depth interviews with 69 women.

The report details “the barriers survivors face in reporting and getting help, including social stigma, lack of awareness about domestic violence and services for survivors, and lack of trust in police.”