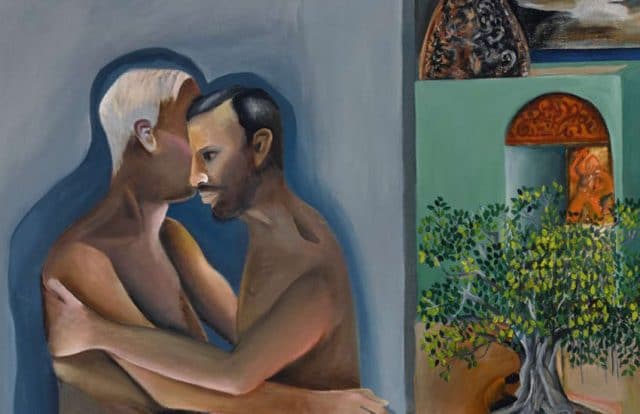 A painting by Indian artist Bhupen Khakhar sold for US$3.2 million at Sotheby’s in London this week.

It became the most expensive painting by one of India’s few openly-gay artists sold at auction.

Two Men in Benares, depicting naked men in an embrace, is ‘an icon for gay culture far beyond India’,

After 20 minutes of bidding at an auction on Monday (10 June), the painting smashed estimates of US$600,000 to find a new home with a phone bidder.

The painting starred in Tate Modern’s 2016 ‘You Can’t Please All’ exhibition of Khakhar’s work. The collection at auction on Monday included some of the most important pieces of modern Indian art.

Khakhar, who died in 2003, became the first major artist to talk openly about his sexuality. He unveiled Two Men in Benares in 1986.

‘There were certainly several million homosexuals active in the Indian subcontinent, but they had left scarcely any trace on Indian cultural life, remaining in the 1960s and 70s invisible, even in films and novels’ Sotheby’s says of the impact of Khakhar’s work.

The painting features a landscape of mountains, water, trees, and religious shrines. Overshadowing and juxtaposing the landscape are two male naked lovers, locked in an embrace.

According to Sotheby’s, one of the lovers, sporting white hair, is unmistakably the painter.

It was only after the death of his mother that Khakhar felt comfortable expressing his sexuality on canvas.

‘I told lies. I did not have the courage to confess I was going to see and meet my boyfriend’ Khakhar said in a 1995 interview.

‘But Gandhi spoke truth; I told lies. He was fearless; I was and am still, a coward. Now slowly at the age of sixty I have summoned up the courage to speak about my preferences, about my boyfriends.’

Last year, India finally . The law had decriminalized gay sex with up to 10 years in prison.

‘It is the British Raj and our Victorian inheritance that has made us timid’ Khakhar said in another interview.

‘At a certain stage in our history, the British made us feel ashamed of our sexuality, of our society’s traditionally more open approach to body and sex’ he also said.

‘This has now made us into a nation of hypocrites’.