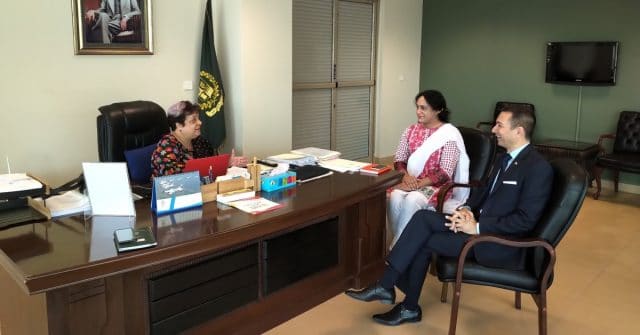 Pakistan’s Human Rights Minister Dr Shireen Mazari has appointed a transgender woman to her department for the first time.

Dr Mazari announced the appointment of Ayesha Moghul today (May 30) on Twitter.

“Welcomed our first transgender Ayesha Moghul who is going to work in the [Ministry of Human Rights] as a resource person – Thank you,” Dr Mazari wrote.

The move was widely praised in the replies. One Twitter user declared that it was a “great step,” while another said the move was “highly appreciated.”

The decision to appoint a transgender woman in the Ministry of Human Rights is a significant one as Pakistan lags behind other countries on LGBT+ rights and public acceptance.

Despite this, things improved for transgender people in the country last year whenthe Transgender Persons (Protection of Rights Act) was passed.

The law allows people to self-identify as male, female or non-binary and to have that identity recorded on official documents, including passports and ID cards.

It also prohibits discrimination against transgender people in public places, including schools, hospitals and public transport.

Just months after the Act was passed, two transgender people were killed in horrifying crimes in Pakistan.

In August, a transgender person was shot dead in the city of Peshawar in Pakistan. Naisr Naso was killed after being tortured, police said at the time.

In September, a transgender woman was burned alive in Pakistan by four men after she resisted their attempts to sexually assault her.

However, things have been improving for transgender people in Pakistan in other quarters. The police force in the country’s Sindh province announced in April of this year that they willnow accept transgender police officers.

The police chief said that it was time to offer more opportunities to transgender people, who are often relegated to “menial jobs” in Pakistan, according to NBC News.