Home Gay Life Pastor Who Said Pulse Victims “Got What They Deserved” Arrested For Child... 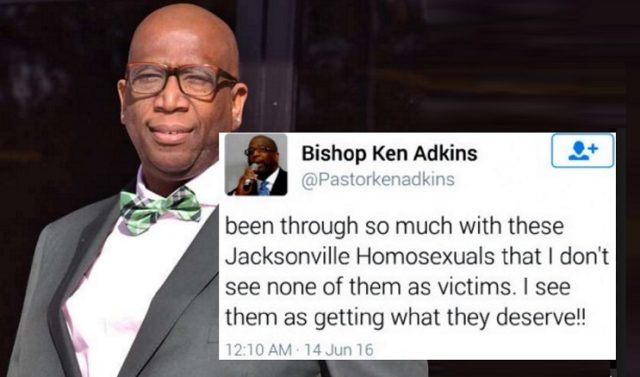 A Georgia pastor who generated a firestorm of controversy after he tweeted that “homosexuals got what they deserved” after the deadly massacre at Orlando’s Pulse Nightclub, has been arrested on charges of child molestation and aggravated child molestation.

Shortly after the Pulse attack, Adkins tweeted, “been through so much with these Jacksonville homosexuals that I don’t see none of them as victims. I see them as getting what they deserve.”

Adkins, 56, later walked back his comments, saying he wasn’t referring to the shooting victims, but instead his tweet was “strictly meant for the Jacksonville group that has made my life a living hell” since he served on the community discussion panel.

The investigation focused on suspected molestation in several locations in the Brunswick area including at Adkins’ church, a vehicle and a victim’s home, Carson said. The investigation is ongoing.

Lawyer Kevin Gough told the Times-Union he is representing Adkins and believes the accusations are said to have occurred in 2010. He said Adkins had willingly turned himself in.

Glynn County Sheriff Neal Jump said Gough “walked him in to the front desk for me this morning.”

His wife, Charlotte Stormy Adkins, said she and the congregation support Adkins and are disappointed in the rush to judgment against him. She is confident he will be cleared of all charges but shares her husband’s concern for the young man who came forward with the allegations. She said he is a part of the church ministry and has been mentored by the couple. She also said while her husband takes leave, she will be interim pastor.

“I know nothing more about the allegations than what has been reported in the news, but it sickens me. If he is found to have done what he stands accused of, he deserves the fullest punishment the law allows,” said Jacksonville Mayor, Lenny Curry.

Here are some more anti-LGBT tweets from Adkins: