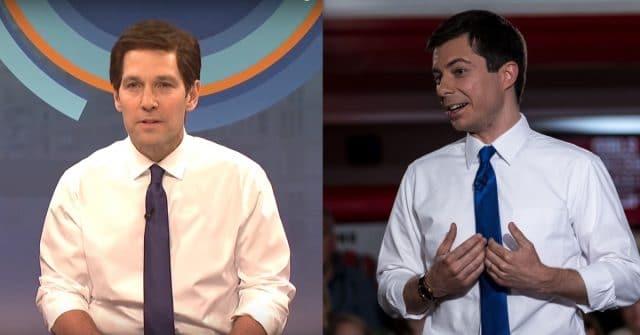 The May 18 episode of Saturday Night Live saw Ant-Man star Paul Rudd drafted in to play Buttigieg for a skit parodying talk show The View.

He added: “I may only be 37 years old, but i do feel like i represent everyday Americans. I’m just a Harvard-educated, multilingual war veteran Rhodes scholar. I’m just like you.”

The Mayor of South Bend, Indiana quips: “I do want to say that I wouldn’t be running for president if i didn’t believe America was ready to accept not only a gay man, but a boring gay man, in the public eye.”

The skit also introduces the candidate’s husband Chasten Buttigieg, played by SNL regular Buck Bennett, who is dragged out despite Mayor Pete’s attempts to talk about policy.

The prospective first gentleman says: “This is all so new to me. Usually i’m just home with the dogs.”

On Sunday, Buttigieg became one of the few Democratic hopefuls to take part in a Fox News town hall event.

Several Democratic candidates have vowed to boycott Fox due to the “extreme” views expressed by hosts on the network.

Buttigieg bucked the trend by agreeing to appear on the channel on Sunday evening, but used the on-air platform to condemn its record.

He said: “A lot of folks in my party were critical of me for even doing this with Fox News.

“I get where that’s coming from especially when you see what goes on with some opinion hosts on this network.

“I mean when you’ve got Tucker Carlson saying that immigrants make America dirty, when you’ve got Laura Ingraham comparing detention centres with children in cages to summer camps… there is a reason why anybody has to swallow hard and think twice before participating in this media ecosystem.”

The candidate added: “Even though some of those hosts are not always there in good faith, I think a lot of people who tune into this network do it in good faith”.

One apparent viewer was President Donald Trump, who hit out at Buttigieg and Fox host Chris Wallace on Twitter.

He wrote: “Hard to believe that @FoxNews is wasting airtime on Mayor Pete, as Chris Wallace likes to call him. Fox is moving more and more to the losing (wrong) side in covering the Dems.

“They got dumped from the Democrats boring debates, and they just want in. They forgot the people who got them there.

“Chris Wallace said, ‘I actually think, whether you like his opinions or not, that Mayor Pete has a lot of substance…fascinating biography.’

“Gee, he never speaks well of me.”