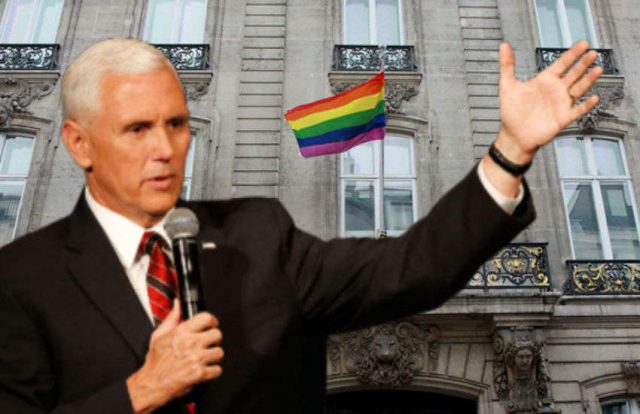 US Vice President, Mike Pence, has voiced his support for the Trump administration banning US embassies flying the rainbow flag.

A number of embassies have had their requests to hoist the Pride flag on their flagpoles during LGBTQ Pride Month.

Now, Pence has come out and told US news station, , that ‘it’s the right decision.’

In an interview with White House correspondent Kristen Welker, Pence confirmed that the State Department had rejected requests from at least four US embassies to fly the flag during June.

Pence said he was aware the State Department had said that only the American flag should fly on the flagpoles. ‘I support that’, he then added.

‘As the president said on the night we were elected, we’re proud to be able to serve every American,’ Pence told NBC News, when pressed about what he would say to the LGBTQ community that feels the decision runs counter to President Donald Trump celebrating pride month in a tweet.

‘We both feel that way very passionately,’ Pence said. ‘[B]ut when it comes to the American flagpole, and American embassies, and capitals around the world, one American flag flies’.

Pence’s comments come after a number of US embassies starting defying the ban, on Monday.

Pence said the Trump administration had “put no restrictions” on the pride flag or other flags flying elsewhere at US embassies.

American diplomatic posts have been flying the pride flag inside embassies or putting banners on buildings’ exterior walls. However, requests to put it on the embassy flagpole, as was done in years past, had been rejected.

LGBTQ rights groups and some US diplomats have raised concerns about the decision, NBC reported.

The groups argue that it contradicts the Trump administration’s claim to be a leader in promoting LGBTI rights globally.

US Ambassador to Germany Richard Grenell is one of the ambassadors whose requests to fly the pride flag were rejected by Washington. He is leading an administration campaign to decriminalize homosexuality around the world.

President Trump even tweeted in support of LGBTQ Pride Month and the decriminalization campaign, NBC reported.