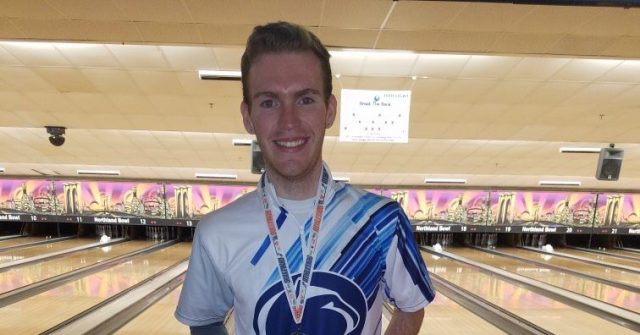 The only thing I wanted when coming out as bi was to be treated exactly the same. Seeing my college teammates at Penn State for the first after coming out to them this spring, I feared things would be awkward.

That wasn’t the case at all — I was simply just one of the guys.

Sports have always played a pivotal role in my life. I’m a die-hard baseball fan and Phillies season ticket holder. I take fantasy football way too seriously. I was involved with soccer, flag football and basketball at different ages as a kid, and I played baseball from Tee-Ball up through my first year in college.

And then there’s bowling.

Bowling runs in my blood. My mom bowled, as did most of her brothers. My Pop-Pop has a league named in his honor at a local alley. So, naturally, my mom got me involved with the sport at the ripe age of 5.

I was hooked instantly.

Bowling was the sport that gave me an opportunity to thrive. Over the years, I was always near the top of my leagues in average. In October 2015, I rolled my first perfect game. I had fantastic teammates, so my teams saw a lot of success. At one point, I was a part of five straight league championships.

I always knew I wanted to go as far as I could with the sport, so much so that it was a factor in my college decision process.

My first two years of college were spent at one of Penn State’s satellite campuses, Brandywine. Not being able to start at University Park, the main campus, was difficult, but it’s the route many students take. I didn’t mind my time at Brandywine, but I was disappointed I had to wait to pursue collegiate bowling.

But it did open the door for me to understand my sexuality.

Penn State requires every student to take a public speaking course. I took the course my sophomore year with a new professor who was heavily involved with social justice and intersectionality. 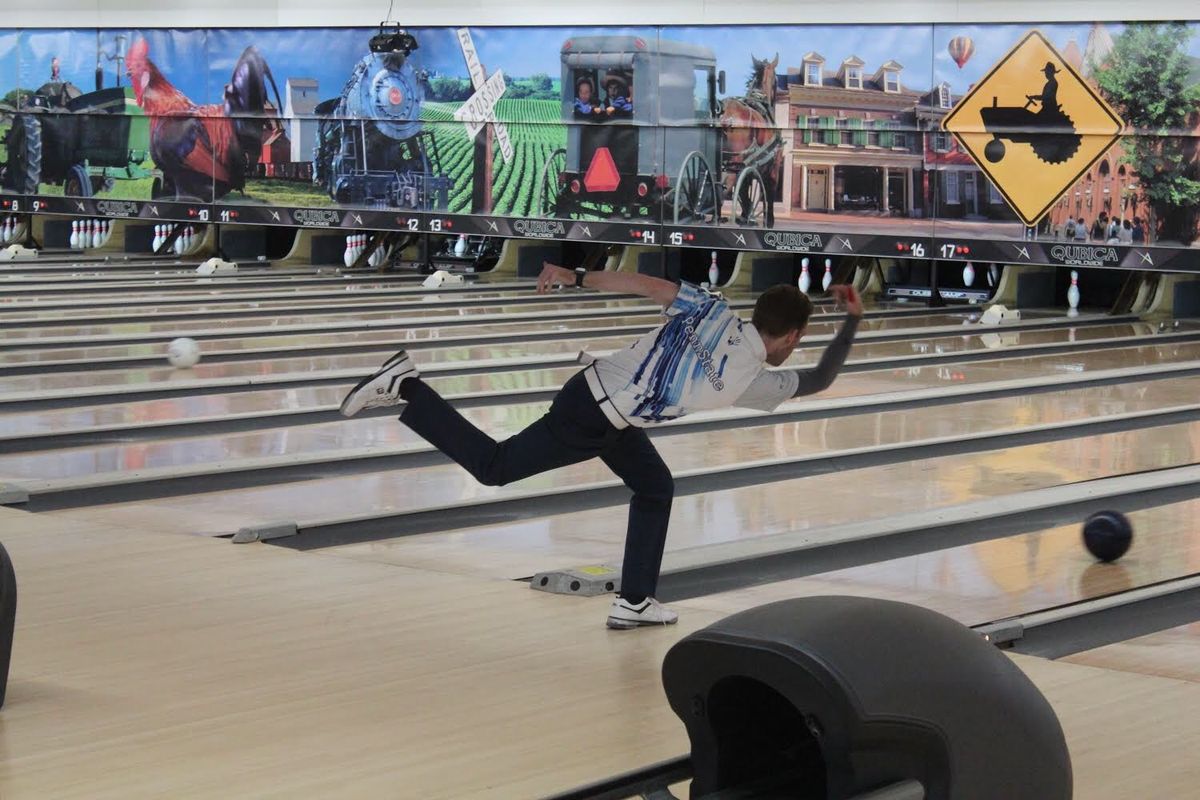 For her course, she wanted everyone to give speeches on an oppressed or disadvantaged group. I knew I wanted to talk about an LGBT-related topic but was unsure which direction I wanted to go, so I did some research on different issues.

At this point, I knew I wasn’t straight, but I didn’t understand what I was feeling.

I knew what straight was and I knew what gay was. What I didn’t understand was this mixture of attraction towards both guys and girls.

Through age 12, I always had crushes on girls. In 7th grade, I started to notice myself attracted to guys. Despite this, I still would develop feelings for girls as well. I knew what straight was and I knew what gay was. What I didn’t understand was this mixture of attraction towards both guys and girls.

Later, I learned the word bisexual, but I didn’t have a true understanding of what it could mean. My attraction towards guys and girls aren’t equal, so I thought I didn’t “qualify” as being bisexual. Being required in class to research the LGBT community helped me understand who I was, that my feelings were valid and that there are others out there like me.

I may have become comfortable in my own skin, but that didn’t mean I was ready to share that part of me. Being bisexual was still somewhat of a foreign concept.

In August 2016, the start of my junior year, I transferred to University Park. Moving to State College felt like a change that I needed. I decided to start losing weight, dropping 80 pounds in just eight months and over 100 pounds overall. By my senior year, I started coming out of my shell socially. I planned to live my life openly once I moved off to college, but I never got to that point.

Joining a new team, I was concerned about how I would be viewed if they knew I was attracted to guys. I wanted to be judged based solely on my abilities.

I started my first collegiate tournament bowling JV and finished with the 12th highest series, and second best on our teams. Any doubts about how I would fare in a competitive setting were out of my mind immediately. The rest of that semester I bounced between varsity and JV, and by the spring semester, I was set on bowling varsity.

I had a blast that first season, getting to travel as far as Chicago to compete. Unfortunately, I never felt connected with anyone outside of being teammates.

My second season was when teammates started becoming family.

The worst part is I never really had a reason to believe any of this.

There were many times I considered taking the plunge, but I always found excuses not to.

Sure, there was your typical gay joke thrown around here and there, but never did I feel anything was malicious or that they would have issues with me. But in my head, none of that mattered: the possibility was there, and my mind jumped to worst-case scenarios. I was petrified of the possibility of losing the only friends I really had at Penn State. There were many times I considered taking the plunge, but I always found excuses not to.

Two days before my college graduation, I met my first gay friend, Sal. The two of us clicked instantly. We hung out that Thursday night, most of the day Friday, then Saturday afternoon I was walking in my college commencement.

Graduation night was one of the scariest nights of my life. I had a major panic attack that lasted for three hours. There was so much running through my head at once: I was getting ready to enter the real world, I was done with college bowling, I was leaving my friends and the place I called home for the past 2 1⁄2 years, and I was questioning the opportunities and people I may have missed out on meeting during my time at Penn State by not having lived as my true self.

Meeting Sal and realizing the regret I had about the past few years pushed me to embrace the full me. I started allowing myself to talk to guys, and I went to my first gay club. Growing up and through my acceptance process I never believed it was important, but I came to truly understand the impact of exposure and visibility.

On April 5 of this year, a guy I had been talking to texted me saying he was not in the position for a relationship. He was the first guy I let myself open up to emotionally, and I had no idea how to cope.

Sal was the only person who knew I was talking to him, and he wasn’t responding initially. I wasn’t out yet, so I had no one else to turn to. Just after midnight, I couldn’t take bottling everything up anymore. I told my friend Sam (ironically, a girl I had a crush on in high school) about what was happening and why I was upset. A half hour later, I told some of my college teammates. The next morning, I told my dad.

Sam congratulated me on coming out, then she did what she could to cheer me up. My teammates were supportive, telling me that everything was going to be OK, that they were there for me, and apologized for anything that might have offended me.

My dad and I didn’t discuss what happened until a few days later. He had a lot of questions and concerns, but he told me he loved and supported me and that had my back.

When returning to Penn State for Blue & White weekend a week after coming out, it was like nothing had even happened. That weekend was like any other weekend my teammates and I were together. My coming out wasn’t even brought up outside of me asking who knew about me.

The fear I had of making things awkward was all in my head.

It’s one thing to say nothing will change, but it’s powerful to see that come to fruition. On my drive home, I caught myself smiling like an idiot over how happy I felt that things were normal. The fear I had of making things awkward was all in my head. Even with my dad, it has been a complete non-issue since coming out. Everything has been exactly the way it was before.

The past few months have taught me the importance of exposure and visibility.

Just having that one person to talk to who knows what you’re going through has propelled me to the point I am today. I know I still have a way to go on my journey, but it’s reassuring to know that everything is going to be OK. The people who are most important to me have my back and that’s all I need.

My only regret now is that I hadn’t done this sooner.

Tim Culin-Couwels, 23, graduated from Penn State University in December 2018 with a degree in Statistics. He was a member of the Penn State Bowling team during his 2 1/2 years at the University Park campus. He can be reached at tjculincouwels@gmail.com, on Twitter, on Instagram, or on Facebook.