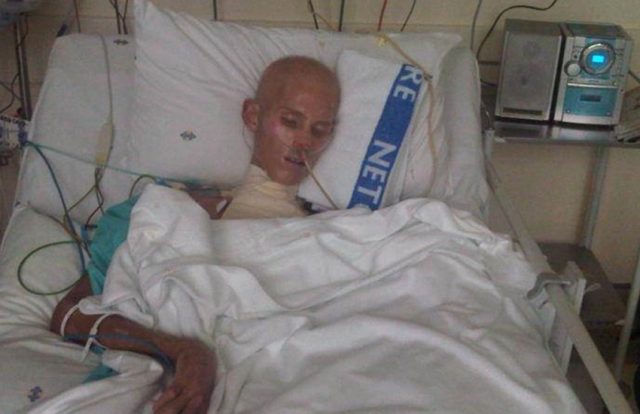 This boy, who went to a course intended to turn him into a ‘man’, died at just 15.

This picture shows a skeletal, emaciated figure fighting for his life.

Raymond Buys was starved and tortured and even forced to eat his own feces. Severely malnourished, dehydrated, with burns and wounds all over his body, he lay in intensive care for four weeks until he died.

Just 10 weeks before, the teen’s parents signed him up in 2011 for the Echo Wild Game Rangers course in South Africa in perfect health with the intention of ‘making him a man’.

We do not know how he identified sexually, but for being ‘effeminate’ he was chained to his bed every night and was repeatedly tortured.

In one witness testimony, a fellow victim said the course ‘General’ tied Buys to a chair naked with his head covered in a pillowcase, would beat him with planks and hosepipes, and would electrocute him with a stun gun.

This is an extreme, but very real, instance of ‘conversion therapy’.

Every single time I have to write about this ‘therapy’ in a news article I remind people that ‘gay cures’ have been condemned by every mainstream health and psychological group in the world. They do not work. They are dangerous to a person’s mental and physical health. And they should not be attempted by anyone.

But memes like this only distract us from the very real danger of what ‘conversion’ camps actually are: It bears repeating: the election of a Vice President who supports ‘gay cure’ therapy is not normal.

Laughing about the possibility of being sent to a gay cure camp is not normal.

We cannot allow this to become the ‘new normal’.

Many people believe ‘gay cure’ camps are basically full of repressed gay dudes sitting around praying all day and then going into each others bunks to have sex.

But even if you are not murdered in the attempt to make you ‘manly’, the vast majority of the people sent to these camps are vulnerable teens.

I shudder to think about the LGBTI teens whose families sent them to be ‘cured’, were traumatized, and later committed suicide. The number is countless.

Alex De Koker, the ‘gay cure General’, was found guilty of murder, child abuse and neglect in 2015. He was sent to prison for 25 years.

But this has not stopped ‘courses’ like his from cropping up all over the world. ‘Gay cures’ need to stop immediately, and we need to do everything we can to make sure they do not exist. The danger is very, very real.

Joe Morgan is the editor-at-large at Gay Star News. He can be reached on Twitter.