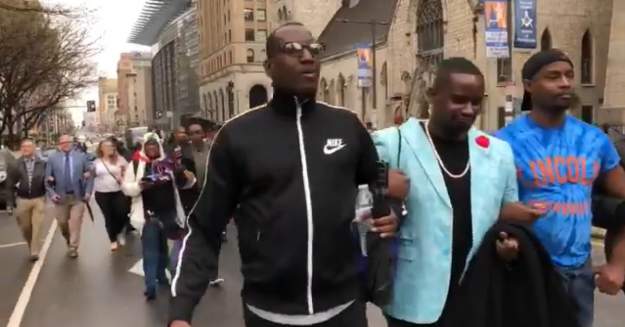 A group of 35 people gathered at Philadelphia’s City Hall to express the need for inclusion in the city in terms of race and LGBTQ acceptance.

“When we bind and unite like this,” Gibbs said, “people cannot destroy us.”

Mayor Kenney also spoke at the event and shared the mentality that LGBTQ people of color deserve respect.

“You are my brothers and sisters,” Kenney told the crowd. “You are human beings who deserve dignity.”

From there, those who gathered marched around the building with a police escort.

“I’m proud of my black skin. I’m proud of my brown skin,” LGBT folks in Philly’s first Black Pride march chant as they circle the street around City Hall. pic.twitter.com/macKT3YNDg

In a time when two black men can be arrested for sitting in a Starbucks for less than 10 minutes (and later take the high road by settling with the city for $1 each and $200,000 for youth programs), Black people in the city are compelled to express their dissatisfaction with the current situation.

Besides the race issues between Black people and the general populace, there is a specific concern for race problems within Philadelphia’s Gayborhood.

From the owner of a popular gay club being caught saying the N word to controversy over the inclusion of black and brown stripes to the Rainbow flag, racially charged conflict has been especially prevalent in the LGBTQ sections of the city.

Things have gotten so bad that the city legally stepped in to introduce inclusivity training in the Gayborhood.

Truly a pleasure speaking and leading the march at the 1st Black Pride march in Philly. I stand with my LGBTQ brothers and sisters. pic.twitter.com/a9sUljdlk0

Despite the government’s involvement, Black LGBTQ people and LGBTQ people of color still feel the need for acknowledgement, protections, and a voice in the city. This exactly mirrors why Philadelphia Black Pride was founded back in August of 1999.

Each year since, Black people living in the city and living around it join together for a week of charity, protesting, and partying. Then last week, 35 people gathered to march the Center City streets, according to the Philadelphia Inquirer.

“This is a chance to just have something of our own, even though we welcome our white brothers and sisters in solidarity,” said Antar Bush, an LGBT community organizer who planned the march with the help of the city’s LGBT Affairs Office. “It’s not about exclusively. It’s about being more inclusive.”

The Inquirer also asked March participants how much progress they thinik Philadelphia has made in terms of racism in the Gayborhood and the LGBTQ community at large. The responses varied.

“I’m 75 years old, still fighting with youth for their rights to be who they are in being black and brown people. That to me is more than my sexual orientation,” Tyrone Smith, a gay Philly man, says. pic.twitter.com/Vyk0hxWE2r

“There’s still too many people that are afraid of black people,” says Deej Johnson, 29, who identifies as non-binary transgender. pic.twitter.com/RuMIac6hon

“The issue of racism in the LGBT community is not a new one,” says @AmberHikes from @PhillyLGBTgov. She says it takes “really tough conversations” to address the issue, and that Philly is leading the way in starting those conversations. pic.twitter.com/q1XlBOadRQ