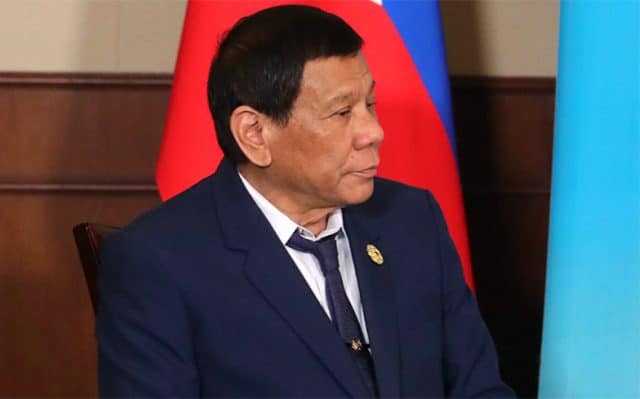 Rodrigo Duterte was speaking on stage at a Filipino Community Meeting in Tokyo, Japan on Thursday 30 May when he told the crowd that he was “cured” of his homosexuality with the help of beautiful women, according to The Independent.

Specifically, he says he “became a man again” when he met his first wife, Elizabeth Zimmerman.

Conversion ‘therapy’, which has been discredited by the NHS and the World Psychiatric Association, refers to any attempt at changing a person’s sexual orientation or gender identity, and often involves techniques like electroshock therapy or prayer.

Duterte also implied that one of his strongest critics, Senator Antonio Trillanes IV, is gay in an attempt to mock him. He claimed that a gay person had told him that the way the senator moves means he must be homosexual.

The outspoken 71-year-old leader then called four women to come up onto the stage to kiss him as his longtime partner Honeylet Avanceña – who he called his “one and only” – watched on.

Following backlash over his comments about ‘curing’ himself of his homosexuality, Duterte’s spokesperson Salvador Panelo said the LGBTQ community should be “glad” that the president suggested he had cured his homosexuality.

“The remarks meant that he had ‘changed’ his sexual preferences,” Panelo said in comments reported by the Philippine Daily Inquirer on Tuesday 4 June. “What’s wrong [with that]?”

Back in 2016, Duterte faced backlash after he called the US ambassador a “gay son of a whore” which led to a cancelled meeting with then-President Barack Obama.