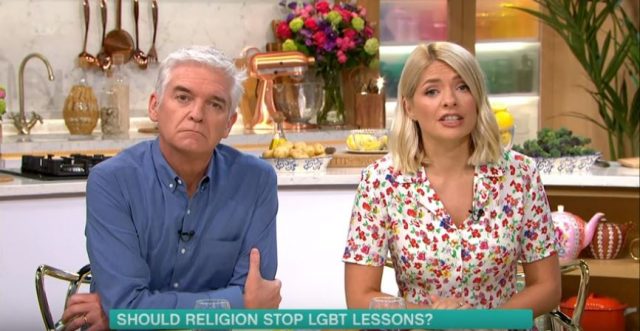 Schofield and his co-presenter Holly Willoughby had Afsar on their show, who has led protests against Anderton Park Primary School for its LGBT+ inclusive education programme. Melissa Thompson also appeared on the show.

Afsar explained why parents are protesting at the school over the lessons, and told Schofield and Willoughby that parents feel that primary school children are “not of an age to understand such complex relationships.”

He also said that children would struggle to understand “even some heterosexual relationships or even about Islam or religion and stuff.

“Parents feel that in primary school, we should be teaching our children about humanity, respect for humanity. Parents at the school shouldn’t feel like the school is over-promoting one narrative and not the other and we should try to make it transparent,” Afsar said.

At one point in the debate, Schofield interrupted Asfar and pointed out that he doesn’t have children at the school.

Later, Schofield said: “But aren’t you discriminating against the LGBT community, you’re doing exactly what you’re saying is happening to you?”

Asfar responded by saying that this was a “misconception” and said: “What the parents are saying is we feel that any community, whether it’s LGBT, whether it’s Muslim, whether you have religious faith, that we should be able to live and co-exist with one another even if we have different beliefs or different views.”

Schofield followed up by asking Asfar if he considers himself to be a “tolerant man,” to which Asfar said he had been made out to be “homophobic” by the media.

However, Schofield then slammed the protester and said: “You are discriminating because what you’re doing is, you’re encouraging your children, as parents you will encourage your children to be less tolerant.

“Now eventually those children, because thankfully children are much more inclusive nowadays, that generation will grow up, and they will probably, potentially, possibly, reject your views, and you will widen the gaps between generations.”

Thompson also slammed the protester for his comments.

“I find it really rich that you use words such as ‘intolerance’ and ‘discrimination,’ that you are victim, that you and the people that you speak for are victims of that. That is exactly what you’re doing, you’re being intolerant and discriminatory towards gay people.”

The debate on This Morning comes after weeks of protests at Anderton Park Primary School in Birmingham over LGBT+ inclusive education.

Yesterday, school headteacher Sarah Hewitt-Clarkson revealed that police are investigating threats she has received by phone and email over the programme.