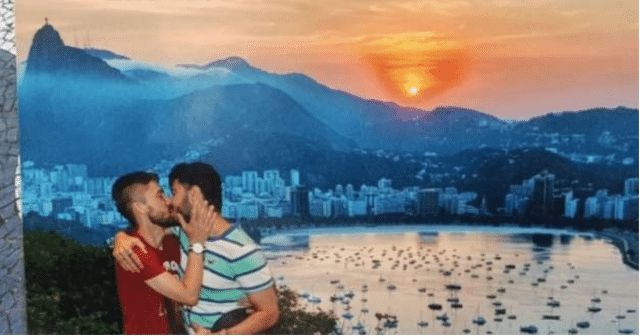 Millions of people have complained about the photo of a gay kiss at Brazil’s second most popular tourist spot, but the man in charge of photography says he has no intentions to remove the image.

Sugar Loaf Mountain is second only to Christ the Redeemer in Brazil’s list of tourist attractions and million visit annually, according to The Intercept.

Recently, many visitors have been offended to see the image of two men kissing at the front lobby of the establishment.

When you walk into the waiting room, you are given the option of taking a photo in front of a green screen. You can then ask to have a variety of backgrounds supplied for your photo. Many of these images have then been placed up on the wall as sample photos, and at the direct center of the wall lies one of two men kissing.

Pedro Lotti, the 29-year-old manager of the photo operation company, FTG – Fotográfica, shared with the Intercept why he deliberately placed that photo where everyone could see it.

“I did it specifically because roughly 70% of our employees here are gay, and they experience serious problems here because of this,” Lotti, who isn’t gay, stated.

Lotti shares that it took a while to acquire a photo of two men kissing because gay couples are often afraid of displaying homosexual relationships in public.

While LGBTQ people enjoy many of the same legal rights as their straight peers, despite a Brazilian judge ruling in favor of conversion therapy, there is a toxic and violent atmosphere around LGBTQ life in the country.

Eventually though, Lotti did find a couple willing to not only kiss in a photo, but consent to having their image placed in the middle of the sample pictures wall.

Unfortunately, Lotti and his employees have now dealt with complaints and anger on a regular basis..

“We get complaints every day. They typically complain, specifically, that the photo is in the line of vision for children, and are angry that their kids specifically have seen the photo,” Lotti explains to The Intercept.

He also shares the point that there are several pictures of straight couples kissing, but “nobody ever complained about those.”

“The problem,” Lotti said, “is always with the parents, not the kids. Depending on how the parents respond, that determines whether the kids react positively or negatively.”

That said, Lotti did share that there have been a few good moments. Though far and in-between, some parents have responded with love and understanding when children asked them about the photo of two men kissing.

With Brazil becoming an increasingly dangerous place for LGBTQ people, it’s the words and actions of those few parents and Lotti that could slowly edge away at the hate.