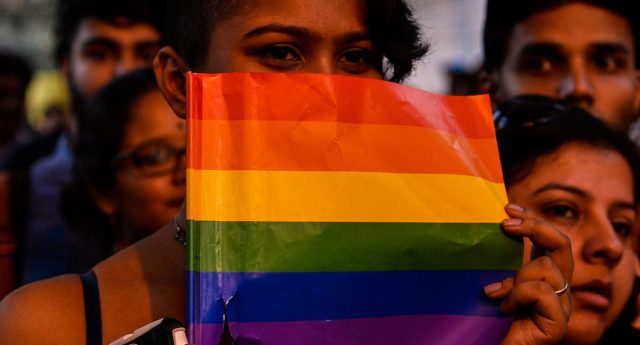 Hundreds of LGBT activists marched in the Pride parade in New Delhi today to draw attention to discrimination against India’s LGBT community.

Marchers called for a repeal of the law that criminalises homosexual acts. The penal code which criminalises acts was overturned in 2009, but four years later the move was overturned who decided repealing the section which dictates the law should be up to parliament, not judiciary.

At the #DelhiPride march in downtown Delhi, loads of fabulous queer folk marching for their rights in the afternoon sun, a small security presence is on the sidelines (so far). #equality #respect #LGBTQ #delhigram

Gay sex is punishable by up to 10 years in prison in India.

Many in the LGBT community report a rise in tolerance in the country, especially in large cities, but for the most part being LGBT is seen as “shameful.”

This year marks the 9th year of marchers walking for equal rights, and this event drew hundreds of activists.

Saurav Jain, a 33-year-old architect at the event, said: “There has been a lot of change, and we have gone back also.” Activist Rituparna Borah is not hopeful for the future because she fears the Hindu nationalist government and Prime Minister Narendra Modi are not supportive of gay rights. “We have yet to have an inclusive society,” she said.

Hundreds of people were arrested last year under India’s Colonial era anti-gay law.
Homosexuality is illegal in India under freshly-reinstated Section 377 of the penal code, originally based on outdated British law.

"I stand with my trans sisters." Trans rights in India, while recognised, are rarely implemented on the ground. And it's not just the law, we need to change our attitudes too. #lgbt? #transrights #Delhi #DelhiQueerPride #PrideAtCake #PrideMarch #azaadi #delhigram #equalrights

The century-old law was brought back into effect by India’s Supreme Court in 2013, outlawing “carnal intercourse against the order of nature”. There were 1,491 arrests in 2015 under Section 377. Nearly all of those arrested were men, though 207 minors and 16 women among those arrested under the law.