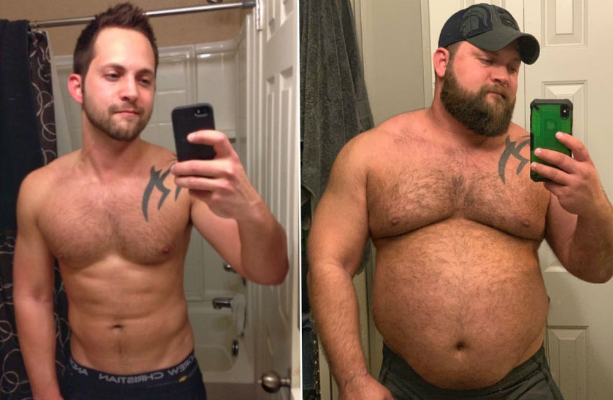 Countless diet and exercise programs promise weight loss results, but Dusty Fuller was looking for a different sort of #bodygoal.

The out business analyst has become something of a viral sensation after sharing before and after photos of his transformation from a jock-ish build to full-on bear.

Fuller, who goes by Cubby online, gained over 100 pounds deliberately over the course of five years.

The post has been liked over 6k times, with nearly 1k comments — it’s safe to say it struck a nerve.

In an interview with GayStarNews he added:

“My weight gain was on purpose. I used to strive to be a huge muscled dude with abs. I started lifting weights in 2012 and worked hard at lifting and counting calories and macros for a few years. However, I just wasn’t increasing my size like I wanted to. I had always been envious of beefier muscled bears, so in 2015 I decided to go that route to increase my size…I wanted to become a Bear.”

Fuller (who is indeed looking fuller these days) shared that he’s been lifting weights four days a week in conjunction with upping his calorie intake to between 4,000-5,000. He said he remains checked-in with his health to ensure his added mass doesn’t risk his health.

“My health takes priority over my weight and size,” he said.

And judging by his Instagram, he’s not the only one who likes the new him: