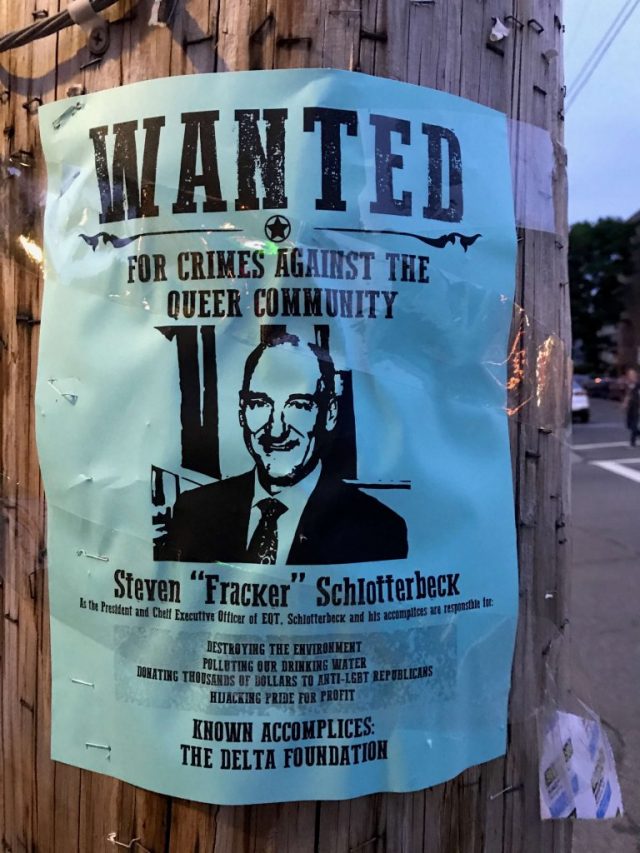 visibility I saw this flyer on a post on Ellsworth Avenue and thought it was such a well done piece of activism. 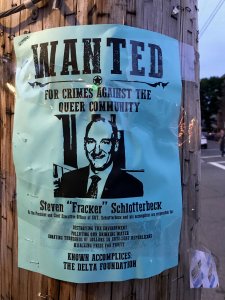 I’ve expressed before what my complaints are with the Delta Foundation and their handling of Pittsburgh Pride, but to make sure I’m being clear, here are my criticisms. This is from an earlier post:

Criticism of Delta and their handling of Pride is not new, and I like others have been very critical of the Delta Foundation. In my opinion, Delta’s goal is to put on a Pride that is best for the whole community… that is what they want to do. But their efforts fall short of that repeatedly because they seem oblivious to any criticism and refuse to change. Their notion of Pride is old fashioned, male dominated, and inconsistent with the changing face of Pittsburgh’s queer community.

As this flyer alludes to, not only is their notion of the gay community out of date, so is their idea of activism and engagement in change. This year’s Pride is supposedly about #RiseUp, and yet taking on a company tied to the rape and pillage of the environment shows no awareness of intersectionality.

Progressive activists and advocates for change understand intersectionality. Delta ain’t in that group although I know their head, Gary Van Horne sees himself as a strong progressive. I say, hypocrisy! We (queer activists) aren’t acting for the whole of the queer community or marginalized communities  if we are calling for gay rights at the expense of clean drinking water, unpolluted land, and the constant feeding of high profits to the companies that cause environmental damage.

It isn’t a question, if fracking is a danger to people, animals, drinking water and the environment. The science is clear. And science is also clear: the poor are the most affected by fracking.

Either the Delta Foundation is oblivious to this , or they just don’t care. We don’t know for sure, but I’d put my money on the notion that they don’t care. For Delta, Pride is this celebration for well off gay white guys predominately. So, something that adversely affects the poor or neighborhoods other than where those white gays live just isn’t on their radar.

So what should you do?

If the poor and the environment are issues you care about, there is really only one action you can take and that is to speak out against Delta and their failure to be progressive. Call out their hypocritical notion of #RiseUp.

Some people in the LGBTQIA+ community will want to turn a blind eye. They look forward all year to Pride as a space to be visible and proud. to them it can seem too much of a high price to pay to boycott Pride, but this mindset of caring only about LGBT visibility and celebration is a part of the problem that impedes progress. So, don’t turn a blind eye! Really #RiseUp against those who seek to profit at the expense of the poor and marginalized. Demand organizations who claim to be about progress and change, walk the walk as well as talk the talk.