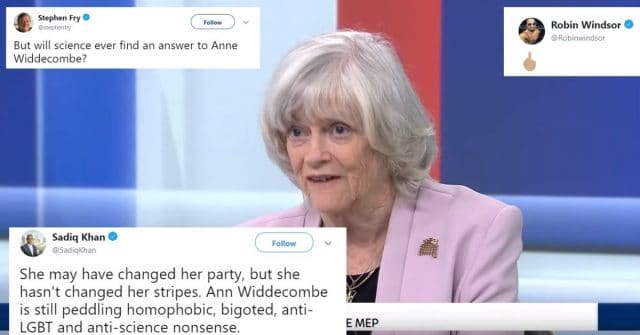 Politicians and celebrities have slammed Ann Widdecombe after she suggested a cure for homosexuality could be possible.

In a Sky News interview on Sunday (June 2), the newly-elected Brexit Party MEP was challenged over a 2012 column in which she claimed “unhappy homosexuals” should be allowed to “investigate any possibility of seeing if he can be helped to become heterosexual.”

Pressed over her comments, Widdecombe claimed: “The fact that we now think that it’s quite impossible for people to switch sexuality doesn’t mean that science may yet produce an answer.”

Gay cure therapy has been condemned by nearly every medical and therapeutic body.

Stephen Fry quipped: “But will science ever find an answer to Anne Widdecombe?”

Stephen Fry was among celebrities to mock the Brexit Party MEP

He added: “Seeing all the bigoted people online today makes you realise that PRIDE month is more important now than ever. Remember WHY we have it and WHY we need it – a lot has been done but there is STILL a long way to go. #PrideMonth.”

Gay ex-Conservative MP Nick Boles responded: “If only science could produce an answer to the blight of poisonous bigotry that is Ann Widdecombe.”

Mayor of London Sadiq Khan said: “She may have changed her party, but she hasn’t changed her stripes. Ann Widdecombe is still peddling homophobic, bigoted, anti-LGBT and anti-science nonsense.”

Labour’s Angela Eagle tweeted: “FGS Back to the future with this pro section 28 relic.”

Alliance Party MEP Naomi Long wrote: “Sadly, science has yet to provide a cure for bigotry, homophobia or, indeed, stupidity. If we could cure those, LGBTQ+ people would be much less likely to be unhappy and much more likely to be accepted and treated as equals.”

David Lammy tweeted: “Absolutely poisonous. Bigots like Ann Widdecombe want to drag us back to the 19th century, throwing minorities out in the cold on the way. We must stand up to them before it is too late.”

Others pointed out that her views have been given new fuel thanks to the electoral success of the Brexit Party.

LBC host James O’Brien said: “Ann Widdecombe hasn’t returned to politics by accident. She has been put there very deliberately by a man whose entire career has been built on stoking hatred & exploiting ignorance.

“The only surprise is that people are still surprised by how seductive Farage’s vile bigotry is.”

Brexit Party leader Nigel Farage is yet to respond to the comments, and the party has taken no action against Widdecombe.

Widdecombe’s comments are far from a one-off.

The former Tory minister had a lengthy anti-LGBT record prior to her re-emergence in the European Parliament elections.

In recent years she has used her Daily Express column to attack LGBT+ equality, branding the acceptance of transgender people “lunacy” and backing businesses who refuse to serve gay customers.

In 2018, she criticised Prince Harry and Meghan Markle for expressing their support for the decriminalisation of homosexuality across the Commonwealth.