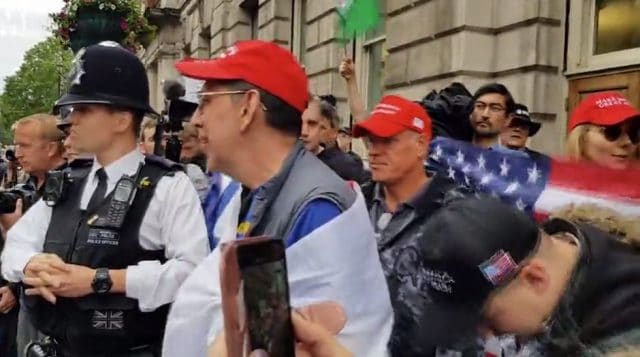 A small group of supporters of President Trump found themselves surrounded by anti-Trump protesters during a march from Trafalgar Square to Parliament in central London on Tuesday, reports The Independent.

Police quickly intervened and pulled the pro-Trump group into a nearby pub for their own safety as cries of “Nazi scum off our streets” rang out, reports the news outlet.

Trump supporters barricaded in Wetherspoons by police after being surrounded by protesters chanting ‘Nazi scum off our streets’ during heated clashes in London: Demonstrations underway as US president meets with prime minister https://t.co/y7ssQVsOBb pic.twitter.com/dfnwd5Q1VW

The Police have since moved the counter-protest group to the Lord Moon of the Mall pub as thousands of demonstrators continue to stream down Whitehall.

Police officers stationed outside the pub told The Independent around 20 pro-Trump supporters are still being held inside and that the incident was the result of a “verbal disagreement”.

Around a dozen Met policemen and women were still guarding the door at the time of writing along with members of the pub’s security team.

Further down Whitehall, another small group of Trump supporters, one of whom was wearing a “Free Tommy” badge, in reference to Tommy Robinson, complained about the media coverage of Tuesday’s protests.

They claimed there were more people at rallies hosted by Robinson and suggested many of those marching did not actually “believe in what they were saying”.

Standing close to the police cordon was John (who declined to give his surname), a 22-year-old ex-solider wearing a “Make America Great Again” cap. He said he was at the rally to defend free speech.

“As a president he has a right to be here. It is a matter of free speech. These protesters are undemocratic,” he said.

Speaking at the protest, Rachael Carl, 21, and Itzayan Rocha, 20, from Minnesota, told Metro UK: ‘We don’t like the racism that he stands for, the alienation, and all that. ‘We don’t think that represents us as Americans – so we’re here.’