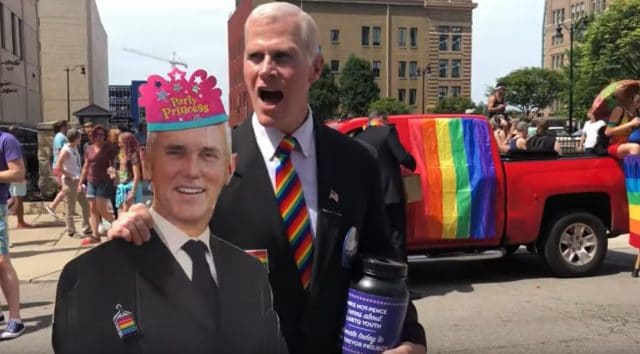 Pitkin County, Colorado, Sheriff Joe DiSalvo said it’s “somewhat disappointing” that no one has paid for the $24,000 security bill racked up during Vice President Pence’s trip to Aspen for a fundraiser earlier this week.

DiSalvo told the Aspen Daily that he is having trouble locating the organizer behind the Republican fundraiser to bill them for the local officers who worked overtime as security.

“We had 64 total police officers on that assignment in the 20 or so hours that he was here, totaling 519 person hours,” DiSalvo said. “Out of those 64, 14 were state troopers, and we don’t have a responsibility to pay them. But the 50 other cops that were here are all on the county dime.”

“I guess the whole thing is generally just somewhat disappointing to me,” DiSalvo went on. “You raise $700,000 in an hour, you should be able to pitch in to support the community that made you feel welcome.”

Couples reportedly paid $35,000 each to attend the Pence fundraiser.

DiSalvo told the paper on Wednesday that if no one steps up to cover the costs for extra security during Pence’s visit then taxpayers will foot the bill.

Had Pence made a public appearance during his visit, DiSalvo said he “wouldn’t have asked for the money because I think that’s a benefit for all of us, that we get to shake hands … and maybe ask a few questions.”

But he added that if Pence “was just here to go to the Republican governors meeting, and was locked away, maybe we shouldn’t pay for that.”