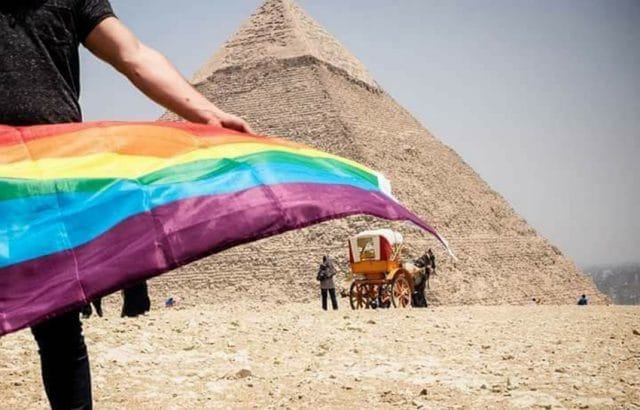 Egyptian LGBTI activists are urging people to delete dating apps as police carry out a spate of arrests.

They say 13 people were arrested in just 24 hours as the police round-up suspected LGBTIs.

It’s all a response to a rock concert on Saturday where gig-goers flew rainbow flags. The concert was by popular band Mashrou’ Leila, which has an openly gay lead singer.

Politicians and media demanded a crackdown on those who raised the rainbow flags.

Gay Star News reported on Monday that police had arrested seven people for ‘the promotion of corruption and immorality’ for flying the flags.

Subsequently, activists said they couldn’t confirm this spate of arrests. It is believed police may deliberately have spread false information claiming the arrests in the media in Egypt.

But in the last few minutes, sources in the LGBTI community in Egypt have provided fresh information to GSN.

‘In recent developments, a real attack has been launched. The police have swept through Ramsis area and captured six people.

‘There is conflicting information about the whereabouts of the previously arrested seven individuals. But we can confirm they have been detained last night.’

They say the ‘rainbow flag raising’ has sparked ‘13 confirmed arrests in 24 hours with an extra three more the following day’.

Further arrests may follow as the police question those they have in custody and apply pressure or physical violence against them.

It’s a typical police tactic for detectives to look through phones and social media profiles to identify more suspects to round-up.

Gays in Egypt flee and hide as they fear for their safety
The incident has sparked mass departures from the Egyptian capital, Cairo. GSN understands some activists have fled their homes in the city. Some have even gone abroad temporarily.

And even non-activists are taking steps to hide their identities.
One Egyptian gay man told GSN: ‘Most of my gay friends are deleting their accounts, or at least any gay related posts or groups.’

The Egyptian activists are working with the region’s LGBTI M-Coalition to rally support. And they have urged LGBTI Egyptians to take the following securing measures for their safety:

Meanwhile the community remains defiant calling on people to support them with the hashtag #WeAreStillStrong.