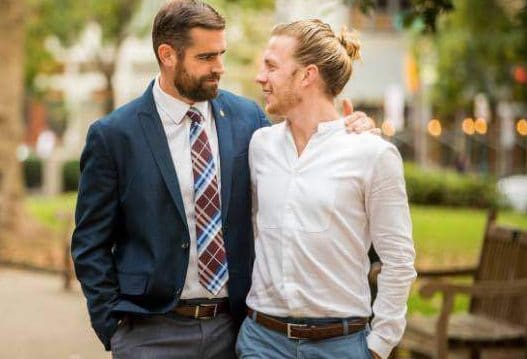 And though that may seem like sweet, simple thing to do. It’s actually both noteworthy, and sends quite a powerful message.

Before I first ran for office, among the prevailing advice I often heard about LGBT candidates is that they should avoid including their spouses in campaign literature. The exact phrasing may have varied a bit, but in the end it was a form of “your partner is great, but don’t put same-sex couple photos on campaign literature or you’ll alienate voters.”

I always understood what they were saying but it was so frustrating to be fighting to elect out, proud advocates of the LGBT community while simultaneously telling them it’s in their best interest to shy away from who they are. For so many of today’s LGBT candidates, that’s happily no longer a reality and frankly, if you’ve met me, you know that I’ve always had a tough time not being who I am.

I may not always listen to campaign advice, but I do stay true to who I am and try to do what’s right, and that’s why I like to think you’re on my team. And I need your support now more than ever.

Our October deadline is in just two weeks, and I’m nowhere near where I should be for the month. Please, make a contribution today to be sure I’m able to continue to fight for all Pennsylvania families.

Sims spoke to the Advocate about displaying gay love:

“For people who are gay but not sure about the extent of love and relationships around them, it’s a good reminder.

“I’d like to think we do it instinctively now, but I don’t think either of us ever forget the purpose. It’s also I love the guy and want to hold his hand.”

“It’s never lost on me that pioneer LGBT lawmakers and elected officials like Tammy Baldwin, Annise Parker, Harvey Milk, David Cicilline, Elaine Noble, Cathy Woolard and countless others had to make more than just political sacrifices to fight for our communities!

“Regardless of your politics, I think we can all agree that there’s not enough love in this world and celebrating and acknowledging those people that make us happiest and love us the deepest seems even more important now than ever before! #BeReal #LoveWins”