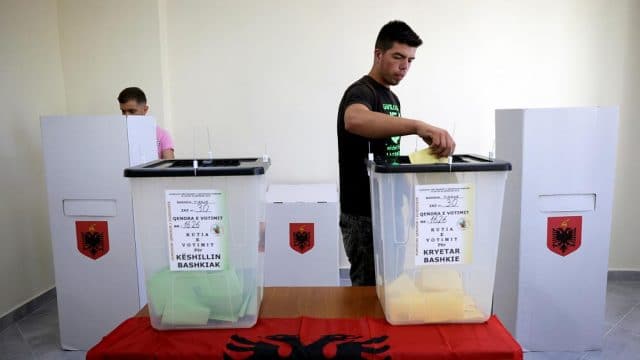 Polls opened calmly on Sunday for mayoral elections in Albania, which the country’s opposition parties are boycotting.

Those who were casting a vote were in some places mocked by abstainers with songs from the country’s communist past.

European bodies and the United States have called on Albanian parties to avoid violence during the elections for mayors of 61 towns and cities. Albania’s President Ilir Meta has decreed the elections illegal because they are not competitive enough.

Because of the boycott, half of the contests will see candidates for the Prime Minister Edi Rama’s ruling Socialist Party running unopposed.

Albania’s Interior Minister Sander Lleshaj told reporters on Sunday that voting was proceeding calmly. He said he was sorry the opposition was missing a vote which “it had every chance of taking part in”.

Last week, supporters of the Democratic Party, which boycotts the election, were accused of vandalising polling stations.

On Sunday, some Democratic Party supporters played music in the streets and at polling stations, even ironically chanting the name of late dictator Enver Hoxha.

The country’s main opposition parties have also boycotted parliament since mid-February, accusing PM Rama of vote buying and demanding that he step down to pave the way for a snap nation election, which he has refused to do.

The European Union, which will decide in the autumn whether to start accession talks with Tirana, has warned polarized local politicians that their quarrels could stand in the way of EU membership for Albania.

“I call on citizens to live up to their civic duty, the more so now we are on the threshold of a truly important decision for Albania, the opening of negotiations for the membership of Albania into the European Union,” Lleshaj said.

Albanian opposition parties have described the election as a throwback to the Communist era, when the ruling party held uncontested elections to confirm its 45-year grip on power.

Socialist candidates are running unopposed in 31 races, including in the big towns of Elbasan and Gjirokaster, while in 24 they face candidates from a newly-formed splinter group from the main opposition Democratic Party.

Prime minister Rama, who has dismissed Meta’s presidential decree cancelling the vote as unconstitutional, said “the voting day confirmed the people’s sovereignty was not an empty word”.