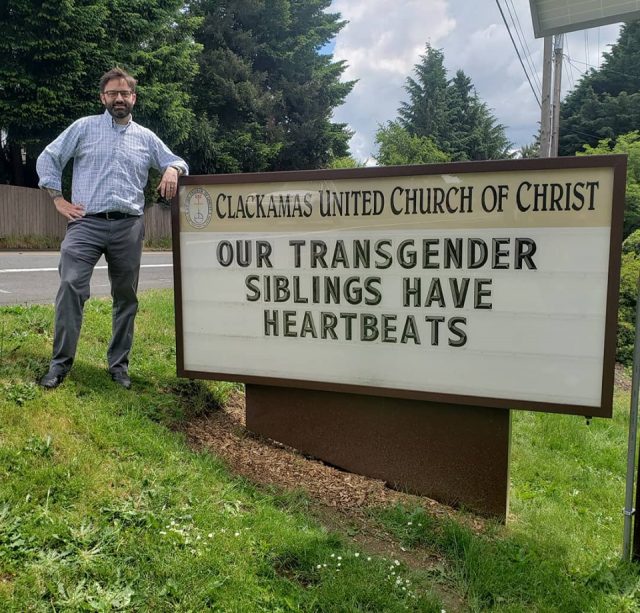 A pastor in Portland is boosting the bible’s message every week by posting progressive political signs outside his church to reach more people in his community.

This week, the sign reads, “Harriet Tubman deserves to be on the $20. End white supremacy.”

Reverend Adam Erickson’s messages are usually biblically inspired, based on what’s happening in the news or his sermon that week. Previous signs have advocated for tolerance towards Muslims, transgender people and immigrants.

Erickson moved to the Clackamas United Church of Christ in Milwaukie, Oregon, just outside of Portland, 18 months ago. He began writing the weekly political messages to spread the message of God to his community and build his flock, he told CNN.

And it’s working – the regular Sunday congregation was originally around 30 people and now sees 50 to 60 people attending the weekly service.

This is because “people are thirsty to know they are loved,” Ericksen said.

Last week, while the debate around abortion bills became increasingly tense, the sign simply said, “Our transgender siblings have heartbeats.”

The trans sign was a huge hit, according to Erickson. He said, “We’ve gotten hundreds of messages, including from transgender people who say they wish they had a church like this in their area.”

There has been “almost no criticism” from the local community, although sometimes people say the messages are a bit political, Erickson said, adding that this was the point of the signs.

“Jesus preached the kingdom of God, and this was politically loaded message,” Ericksen said. “His harshest message was for religious leaders who marginalised people.”

Citing Christ’s sermon on the plain in the Gospel of Luke as one example of Christ calling out political and religious powers who don’t care for the downtrodden, Erickson said to CNN, “But woe to you who are rich, for you have already received your comfort.”