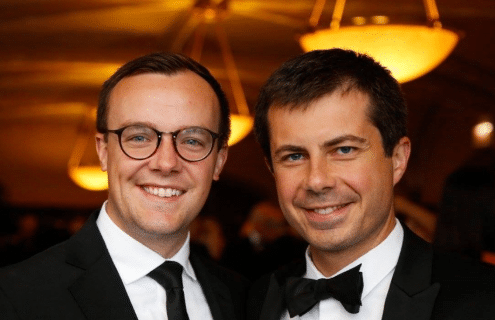 The relationship app is ‘designed to be deleted’

The first openly-LGBTI candidate in the 2020 US presidential race, Pete Buttigieg, has revealed he met his husband Chasten Glezman on dating app Hinge.

Hinge uses Facebook to facilitate connections and prompts users to continue conversations. It takes the slogan ‘designed to be deleted’.

‘I saw this light, something in his eyes’ Buttigieg said of his now-husband. The pair married last year.

Buttigieg said his husband was ‘one of the best things I’ve got going for me’. Buttigieg also praised Chasten’s quick wit and how grounded he is.

Buttigieg said ‘I hope so’ when host Van Jones asked if there would be some ‘small Buttigiegs at some point’.

In the CNN interview, he said the US needed to show ‘moral authority’ on LGBTI and other human rights issues.

He said it was particularly important as ‘other models are being held up right now’.

What’s more, he said if the US could show inclusivity, other countries would be ‘forced by world opinion to make some advancements’.

‘If America is not trusted is not respected, it won’t matter what we have to say about that or any other human rights issue’ he warned.

He is the only LGBTI Democratic candidate running so far and will be the first openly gay presidential candidate to participate in the DNC Primary debates.

A Rhodes scholar and veteran of the war in Afghanistan, the Mayor of South Bend can also speak eight languages.

His primary work as mayor has focused on redevelopment. At 37, he is the youngest presidential candidate in the race.

A poll of Democratic candidates in the state of Iowa last month placed Buttigieg third.

Pete Buttigieg Opens Up About Being Closeted, Coming Out in Rachel Maddow Interview