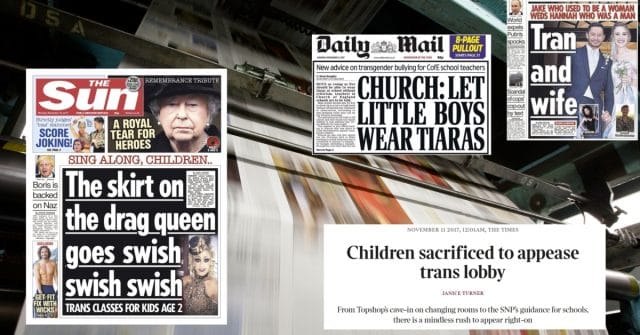 UK press regulator IPSO has commissioned a review of coverage of transgender issues.

A number of British newspapers have been forced to correct and apologise for stories about transgender people over the past year, with LGBT+ campaigners alleging a surge in misleading and “hostile” coverage.

The Independent Press Standards Organisation, the voluntary regulator recognised by many of the country’s largest newspapers, has this month ordered a review of coverage of trans issues.

In a blog post, IPSO’s head of standards Charlotte Urwin wrote: “The way the media covers transgender people and gender transition can have a significant impact on individuals and social attitudes, and also continues to generate wider debate.

“It raises difficult questions about the balance between being aware of the impact of press reporting and commentary on potentially vulnerable individuals, and ensuring that it is still possible to report freely on these social issues.

“IPSO has commissioned Mediatique… to carry out research into editorial standards in the reporting of transgender matters.

“The research will involve quantitative mapping of coverage of transgender matters in the last ten years, as well as qualitative interviews with industry figures, groups representing the transgender community and other relevant stakeholders.”

“I believe that this research will offer valuable insights both to IPSO and to other groups seeking to raise standards in specific subject areas.

“In addition, the coverage of transgender matters is currently under-researched and there are gaps in the evidence base around the standards of reporting and impact on individuals. This research will create a new evidence base for discussions of media coverage in this area.”

The Times, Telegraph, Daily Express and Daily Mail are among the major newspapers voluntarily regulated by IPSO.

However, others including The Guardian and Financial Times do not recognise the regulator.

PinkNews is not a member of IPSO.

In October, PinkNews published an open letter signed by lords, MPs, and leading LGBT+ campaigners, which condemned anti-trans media coverage in the UK, saying this hostility has led to a “significant decline in the mental health of many trans people.”

The letter said: “We strongly condemn the way the British media has given significant coverage to small groups who wish to push organisations to break existing law with regards to trans people.

“The reality is that trans people are far more likely to be targets of violence than other women. Isolated extreme and abhorrent cases cannot be extrapolated to infer the behaviour of all trans people.”

The letter continues: “The relentlessness of the hostility across the media and the media’s inability to adequately challenge the false claims put forward have led to a significant decline in the mental health of many trans people.”