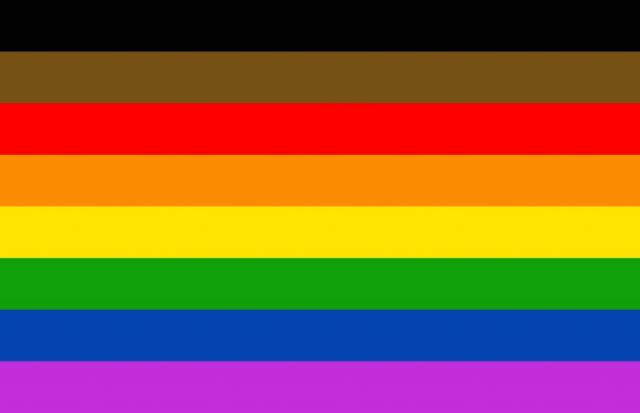 The black and brown stripes were for ‘the LGBTI majority, which is not Anglo-Saxon’.

A proposed Pride Centre in Australia has updated its rainbow logo with two new colours. Brown and black were added to represent LGBTI people of colour.

The proposed Victorian Pride Centre in Melbourne will be an LGBTI hub to bring the community together in a single space. The Victorian State Government has backed the centre with $15 million in funding. It will be built in the LGBTI-friendly suburb of St Kilda.

When completed, the centre will be home to practical and supportive services as well as an international tourist destination.

Its interim logo was coloured strips representing the Rainbow flag.

But the Pride Centre board was inspired by Philadelphia’s More Colour More Pride campaign.

It decided to add two new stripes — brown and black — as a mark of respect for diversity and inclusion of Aboriginal and Torres Strait Islander LGBTI people. Also for the LGBTI majority, ‘which is not Anglo-Saxon’.

‘Our previous logo was an interim logo the board envisaged would change with the evolving discussion about what the Pride Centre will mean for the Victorian LGBTI community’, board member Margaret Hansford said in a statement.

‘In changing the logo, the Board had three thoughts. First, the LGBTI community has been a major beneficiary of increasing public support for diversity and inclusion. We need to be leaders in continuing to identify and welcome groups who feel, or are in fact, excluded from our community.

‘Second, Aboriginal and Torres Strait Islander LGBTI people have helped, in no small measure and by their personal and political examples, to build the community and the organisations we have today; and long may they continue to do so. They face severe and ongoing discrimination and oppression and we want our ‘welcome mat’ to have a specific ‘hello’ for them.

‘Third, it is clear that the proportion of non-Anglo-Saxon people involved in our community and its organisations is substantially lower than their proportion in the general population.
‘We need to constantly remind ourselves the benefits it provides us are not enjoyed by many others, and we need to send signals we want this to change.’

A Centre spokesperson told Gay Star News it has not had much feedback on the change. It had reactions and comments on its Facebook. Most of which were positive, with a couple critical of the change.