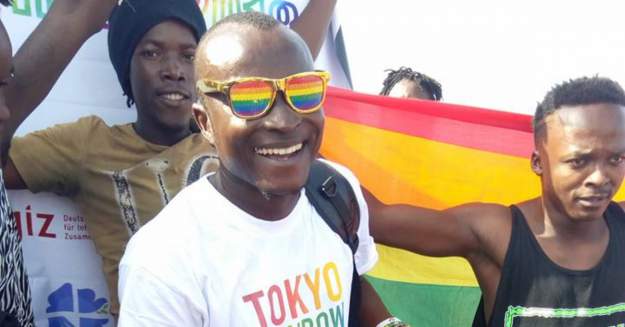 Here’s an inspiring story to start off the week with some positivity. This weekend, the first ever LGBTQ+ pride in a refugee camp took place.

Rainbow flags flew and demonstrators marched through Kenya’s Kakuma refugee camp. The organizers of the event were from Refugee Flag Kakuma, and most of the participants were LGBTQ+ refugees who fled from neighboring Uganda.

Homosexuality is illegal in Uganda. The Uganda Anti-Homosexuality Act was passed in Dec. 2013, inciting a punishment of life in prison for “aggravated homosexuality.” Violent and brutal attacks against LGBTQ+ people are common in the country, often carried out by state officials.

Rlwage Eibusone, a Ugandan transgender refugee who marched in the parade, told AFP: “I’m really happy. I feel like I am with my family and I’m very happy for it.”

A statement from Refugee Flag Kakuma read: “The very first pride event, in Kakuma refugee camp, was fabulous…The event was so colourful, with two LGBTIQ friends and comrades from the USA and England.

“We thank everyone, who has helped out in any capacity to see that our event is a success. May the almighty God bless you all, we love you all, thanks for your good heart and support.”

The slogan of the event was “Stop Homophobia.” Crowdfunding raised thousands of dollars for the parade.

Kakuma refugee camp is the third largest of its kind in the world, housing over 185,000 refugees.