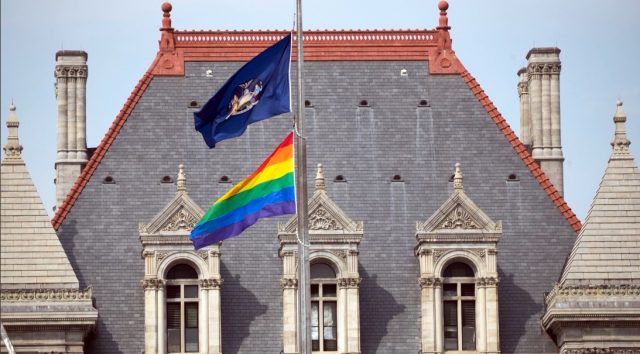 The Pride flag was raised over the New York State Capitol in Albany for the first time in the state’s history.

In celebration of Pride month, Governor Andrew Cuomo announced on Twitter that the rainbow flag was flying over the State Capitol Building, which is the seat of government for the state of New York.

Its presence over the historic government building represents a milestone moment for the state’s LGBT+ community, and is particularly significant after two rainbow flags were set on fire outside a New York gay bar on May 31. Police are investigating this as a possible hate crime.

The flag was raised in conjunction with the opening of a Pride month exhibit, “Equality Will Never Be Silent,” which celebrates the state’s LGBT+ community while recognising the political, cultural and artistic impacts of 16 individual LGBT+ New Yorkers.

The exhibit will also feature portions of the AIDS Memorial Quilt, which commemorates the people who died from AIDS with more than 48,000 individual panels sewn by friends and family members.

In a statement announcing the exhibit, Cuomo recognised the central role New York played in the modern LGBT+ rights movement. He said: “New York is home to trailblazing leaders in the LGBTQ rights movement who broke down barriers and never stopped fighting for full equality.

“This exhibit celebrates and honours these extraordinarily brave and talented people – and New York will always be grateful to them.”

The exhibit will be on display all summer in the Governor’s Reception Room on the second floor of the New York State Capitol.