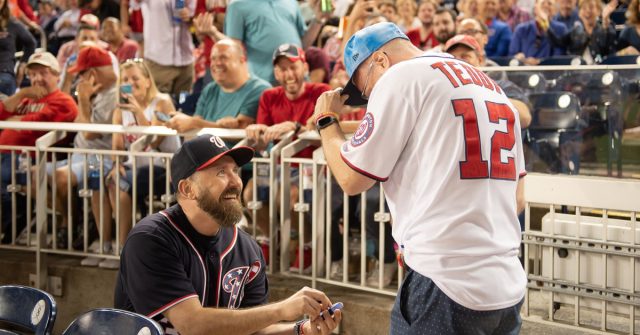 All our hard work is finally paying off, thanks to Pride Nights at MLB ballparks, same-sex stadium proposals and arena kiss-cams featuring LGBTQ fans. And it’s going exactly according to plan, just like we decided at the last Gay Agenda Meeting!

Our imminent success has been certified by the website described by the Southern Poverty Law Center as “virulently anti-LGBT and anti-choice” — LifesiteNews — which declared on Monday: “The gaying of America’s ‘national pastime’ is nearly complete.”

What would the “gaying” of Major League Baseball really look like? Would teams with pinstripes in their uniforms swap them out for rainbow stripes? Could umpires be replaced by drag queens? Maybe the boys from Queer Eye will be providing color commentary on ESPN?

This fabulous pronouncement comes from no less of an authority than LifeSiteNews “journalist,” “author” and self-described “marriage,” “family” and “children’s rights activist” “Doug Mainwaring.” Incidentally, “Doug” really digs “quotation marks” for words like “marriage” and “pride” and uses them with unceasing “proclivity.”

Earlier this year, Mainwaring revealed he considers himself “ex-gay.”

“I once was a gay man taking part in Washington, D.C.’s vibrant gay community,” he wrote on April 12th, “dating and hanging out with guys who worked on Capitol Hill, in the White House, and at the Pentagon.” That was in 2009. Four years later, he came out against marriage equality.

A pout about #NightOUT

What really got Mainwaring all riled up this week was reading what our Cyd Zeigler, among other journalists, wrote about his hometown Washington Nationals Night OUT event.

Pssst, Doug: the Chicago Cubs began the tradition in 2001, four years before the Nats, with “Gay Days.” It’s now called “Out at Wrigley.”

At the Nationals game on June 4, former Rep. Barney Frank accompanied his husband Jim Ready to the mound to throw out the ceremonial first pitch. The Gay Men’s Chorus of Washington sang the National Anthem in center field. And in between the 6th and 7th innings, a fan named Aaron Howell pulled a small box out of his pocket and got down on one knee to pop the question to his boyfriend Teddy West.

The proposal was shown on the stadium’s big screen, and when Teddy said yes, 32,573 fans erupted in cheers. Twitter lit up, too. You can watch video by clicking here.

In celebration of the newly engaged couple, the Nationals foundation will donate $1,500 to @SMYALDMV in support of leadership development and services for LGBTQ youth.

Mainwaring wasn’t cheering, though. He wrote that he was pained by the thought of “innocent children… witnessing the absurdity of a bearded man down on one knee, proposing marriage to another man.”

What kind of person looks upon love, and feels hate? No surprise, the writer also complained about Pride events held by all 31 NHL teams, the Atlanta Hawks, the Atlanta Falcons, the New England Patriots and the Tampa Bay Rays. Oh, and of course, how dare major league sports teams show support for transgender people like me!

But I prefer to think everyone has some redeeming quality. It turns out Mainwaring turned to the ultimate LGBTQ sports authority — us — to report that unlike the Nationals, all but two teams in the MLB have held or have scheduled a day or night game dedicated to LGBTQ fans this year. The Houston Astros and Texas Rangers still haven’t responded to our requests for comment about that. Hope springs eternal.

What’s missed by our opponents — of Pride Nights in particular, and LGBTQ equality overall — are their opportunities to show mercy, to ease the burden of the persecuted, to teach children about acceptance and most of all, to embrace love. 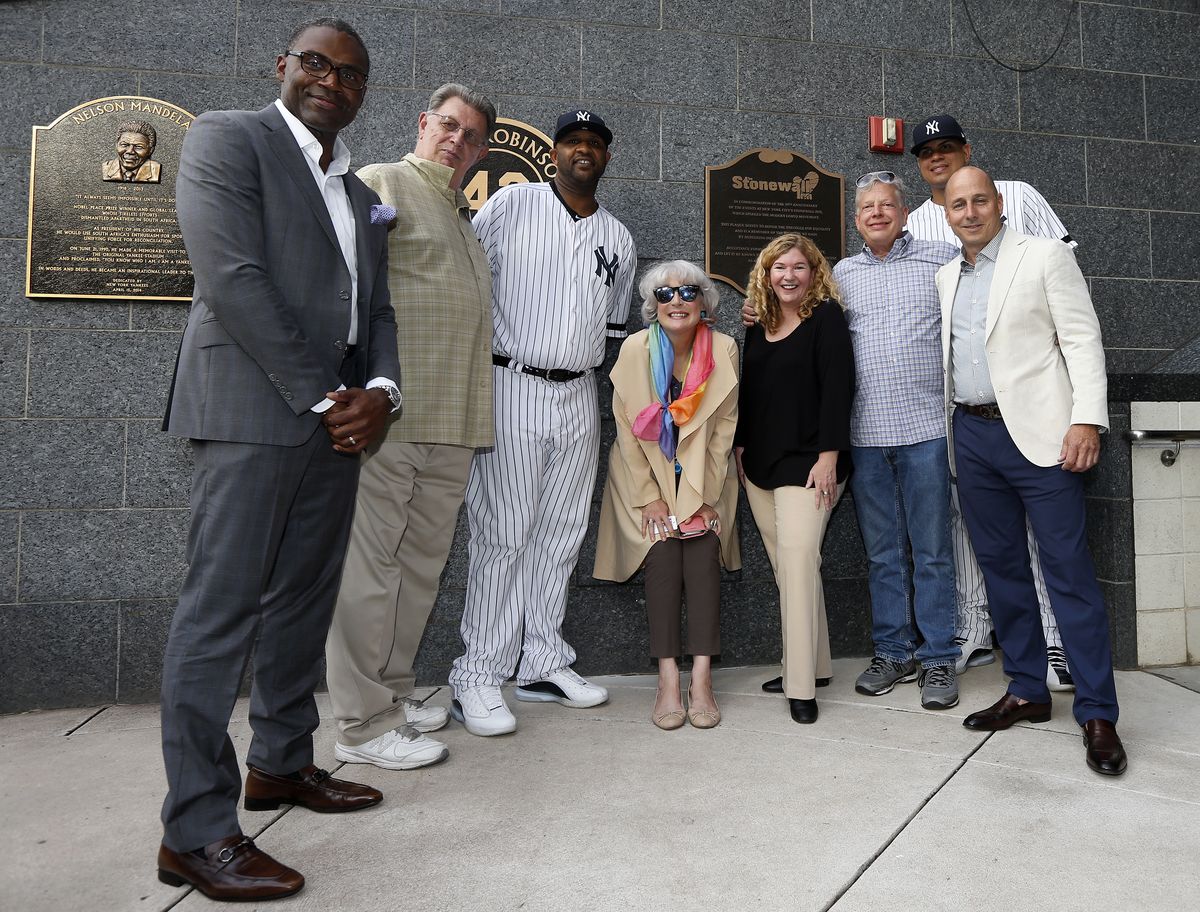 Representatives of the Stonewall Inn and New York Yankees including pitchers CC Sabathia #52 (3rd L), Dellin Betances #68 (2nd R) and general manager Brian Cashman (R) pose for a photograph at the newly unveiled plaque in Monument Park honoring the 50th anniversary of the Stonewall uprising prior to the game between the Yankees and the Toronto Blue Jays at Yankee Stadium on June 25, 2019.Photo by Jim McIsaac/Getty Images

That is what was on display one month ago, when the New York Yankees dedicated a permanent memorial to the LGBTQ movement, alongside those honoring icons Babe Ruth and Lou Gehrig, inside its Bronx stadium’s legendary “Monument Park.” The memorial commemorates the 50th anniversary of the Stonewall Riots and its lasting impact. The team also awarded the first of five $10,000 “Yankees Stonewall” academic scholarships to five high school seniors who are leaders in their communities.

That is also what was evident when the St. Louis Cardinals brought back its Pride Night last week.

It was easy to spot in Lyon, France, when the U.S. Women’s National Soccer team with more out athletes than ever before won the Women’s World Cup, earlier this month.

There it was again in Los Angeles, on a night in May, when the L.A. Dodgers saw attendance soar for its most-attended home game in seven years. Yup: it was LGBT Night. 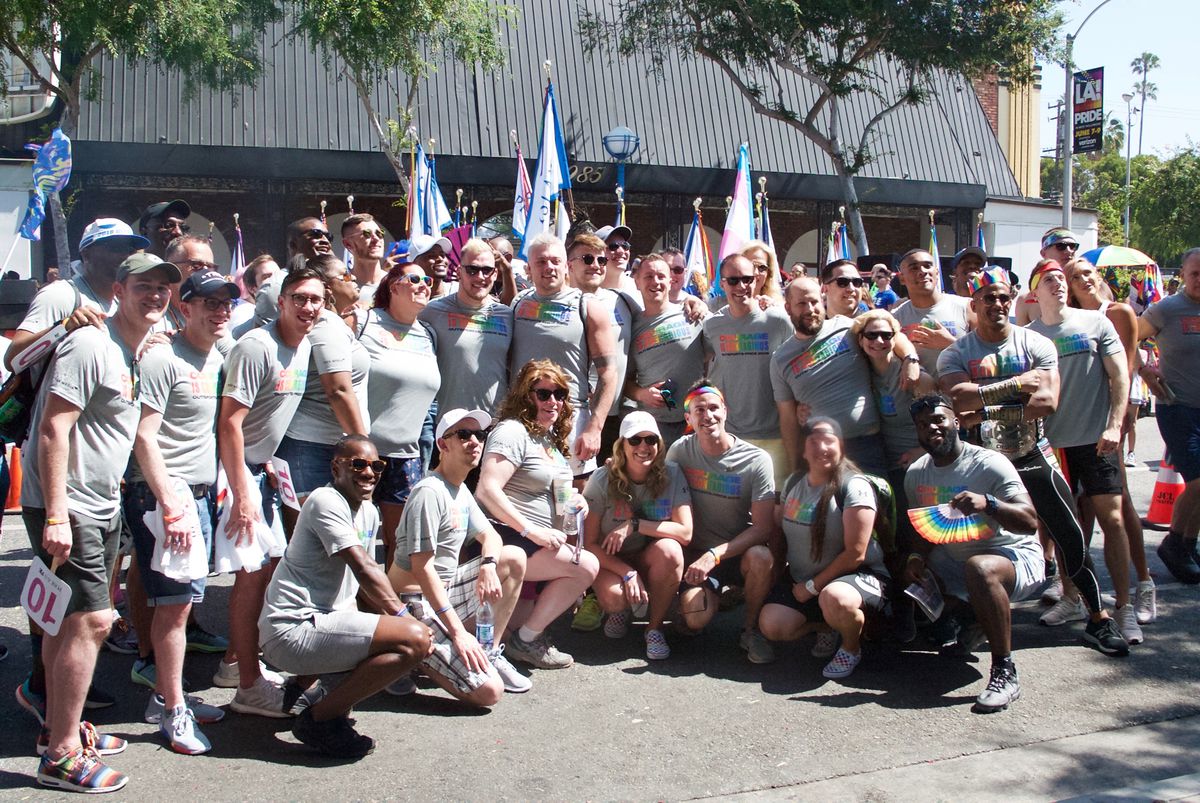 I myself saw the evidence first-hand at Outsports Pride last month, and all around me as thousands upon thousands cheered the out LGBTQ athletes marching with me along Santa Monica Boulevard in West Hollywood, Calif., in the L.A. Pride Parade.

And from mega events like those to minor league baseball, LGBTQ acceptance really is happening almost everywhere. That’s not to say there aren’t haters, like Mr. Mainwaring. No doubt we’ll always have our detractors, our opponents and even enemies. But we have larger numbers. And we’re often far louder.

Yet the most important thing I gleaned from reading their sad little reports and imagined them grinding their teeth about our movement: we must be winning, or else they wouldn’t bother making such a fuss.

Proof of our impending victory can be found by clicking here to view an uplifting photo gallery published by our friends at the Washington Blade, showing all the Nats fans who showed up in June to celebrate their Night OUT.