Over the next few months, thousands of people will take to the streets of the UK and beyond to celebrate and show solidarity with the LGBTQ community. With more Pride events than ever before, it’s great to see so many towns and cities around the world embracing our community.

Recently there has been some debate whether or not Pride is still a protest. In my opinion, until each and every member of the LGBTQ community around the world is free to be who they are without fear of persecution, it will always be a protest. Alongside the celebrations.

Some may see Pride as just a party, but it is so much more that. It wasn’t that long ago we couldn’t be so open about who we are. We all attend events for different reasons, but we must remember why we march, why we have to shout from the rooftops that gay is OK. Because some people still don’t get it.

“Pride was born in 1969 when Marsha P Johnson threw the first brick at the police in the Stonewall riots. The moment that brick was thrown, our fight truly began.”

It’s incredibly important to celebrate the milestones being achieved around the world each and and every year. We have more openly LGBTQ people in politics, popstars celebrating queerness, LGBTQ stories being told on the big screen, and we can get married in more countries than ever before. But it can be easy to get complacent when we make progress, while other countries still attack, discriminate, even torture and kill people because of who they love. 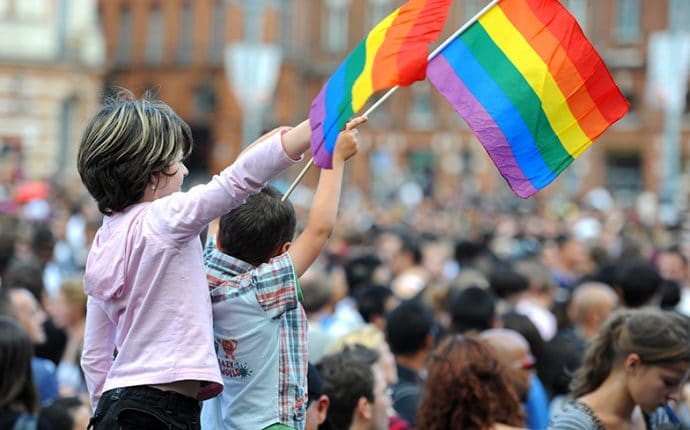 Let’s not forget it’s still illegal to be a gay in over 70 countries around the world, some still punishable by death. With situations like gay men being taken to concentration camps in Chechnya. The crackdown on the LGBTQ community in Nigeria, Azerbaijan, gay men being lashed in Indonesia, the men being thrown from rooftops by ISIS. We must never forget how lucky we are.

Unfortunately, homophobic hate crimes in the UK are on the up. I myself was attacked in November 2017 by three men. There was another case recently where two teenagers put a man in a headlock until he apologised for ‘being gay’, and the men who did it walked away free from court.

Pride matters because it’s not always obvious that the world is built around straight privilege… A straight man can publicly kiss his girlfriend without any consequence, the majority of LGBTQ people are still scared to hold hands, let alone kiss in public.

We’re still fighting for fair and equal representation in the media, but also within our own community. BAME, bisexual and trans people are still under-represented and catered for. Something that is improving, but more needs to be done.

Pride remains as important as ever, but it is so much more than one event a year, it’s a movement. We all play a part in that.

What can you do?

Support local events, venues, and be as active as you can in the LGBTQ community.

You can find all Pride events listed here.

Volunteer or join an LGBTQ group.
Nearly all Pride events and festivals around the UK are asking for volunteers. It’s a great way to give back and support the community while having fun at the same time.

Join one of the hundreds of LGBTQ focused charities and community groups. From running, health and fitness, dance, gaming groups, politics, professional networking and more. It can be a great way to make new friends.

With social media it has never been easier to support a cause. When something happens to our community or LGBTQ topics are being discussed in the press, talk about it, question it, use your voice and show your support.

Look out for local panel discussions and debates. It’s a great way to learn more about LGBTQ issues and have your say. Learn more about racism in the community, sexual health, homelessness, youth issues and the struggles we face.

Keep up to date with global LGBTQ issues and stay vocal. Activism plays such an important role in our community.

“Never underestimate the power of your own voice. We all have the ability to help change. We just have to find our own way.”

Support each other.
Our community is full of so many bright, talented and creative people. Support LGBTQ artists, performers, businesses and allies. Remember the pink pound has value and power, put it to good use.

Be proud of yourself.
Brush off those heteronormative ideals, and embrace who you are. So many people are obsessed with masculinity, femininity, looks, age and so on. Break the mould and be your fabulous self unapologetically.

Be the kind of role model you needed when you were growing up. Take a moment and remind yourself what it was like growing up and coming to terms with your sexuality. You can help others just by being your true self and being visible.

This Pride season, lets send the strongest message of solidarity we ever have. In a world full of so much negativity, we need to stand strong and stand together. Be proud of who you are, your community and how far we’ve come.