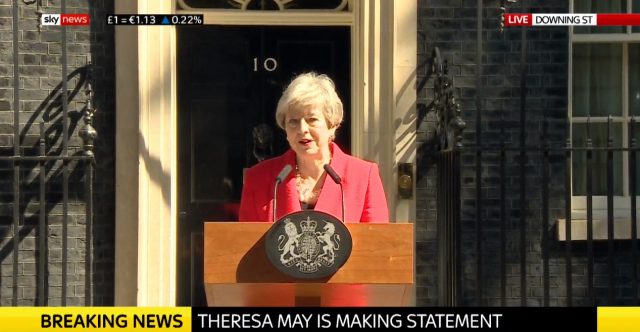 UK Prime Minister Theresa May announced on Friday (May 24) that she will resign next month after failing to negotiate a Brexit deal in parliament ahead of Britain’s exit from the European Union.

Standing outside 10 Downing Street on Friday morning, May revealed she will stand down as leader of the Conservative Party on June 7. She will remain prime minister until a new leader has been elected to take over.

“It is a matter of deep regret that I have not been able to deliver Brexit,” said May. “My successor will have to find a consensus. Consensus will only be possible if those on both sides of the debate ‘compromise’.”

A tearful May said it has been “the honour of my life” to serve “the country that I love.”

May has a complex legacy on LGBT+ issues. We explore the former Prime Minister’s stance on LGBT+ rights and why she will no longer be UK Prime Minister.

The politician first entered politics as a firm opponent of equality, but evolved her stance as Home Secretary, and as Prime Minister reaffirmed the party’s commitments on LGBT+ rights—though she also faced criticism from LGBT rights activists.

Theresa May has faced staunch opposition to her proposed Brexit deals enshrining Britain’s departure from the European Union.

Parliament has rejected May’s deals three times and called for her to resign as prime minister.

The writing was on the wall this week when her latest deal failed to make it through parliament and was derided by members of her own party.

Theresa May began her career in Parliament when she was elected MP for Maidenhead in 1997.

Under Iain Duncan Smith’s leadership, May obeyed the Tory whip to vote against many early reforms, opposing an equal age of consent and same-sex adoptions, even where others including George Osborne and Boris Johnson rebelled in favour of equality.

But within a few years, pro-LGBT voices had become more mainstream within the Conservative Party, and May’s stance was evolving.

Theresa May at the Conservative Party Spring Forum on April 26, 2009 in Cheltenham, England. (Matt Cardy/Getty)

In 2004, under leader Michael Howard, she abstained on gender recognition laws, and voted in favour of civil partnerships for same-sex couples, backing a LGBT rights measure for the first time.

May would later apologise for her early votes.

In 2010, she conceded on gay adoption: “I have changed my view. If those votes were taken today, I would take a different vote.

“On gay adoption I have changed my mind… because I have been persuaded that when you are looking at the future for a child, I think it’s better for a child who is perhaps in an institutional environment, if they have an opportunity of being in a stable, family environment — be that a heterosexual couple or a gay couple.”

Also in 2010, May, then-Minister for Women and Equalities, wrote an opinion piece for PinkNews calling for a cultural change in Britain to make it more inclusive of LGBT+ people.

Theresa May’s stance on LGBT+ rights continued to shift under David Cameron’s leadership. It was May who helped first ensure that proposals for same-sex marriage made it onto the Conservative agenda, promising a review ahead of the 2010 election.

In the Conservative Party’s ‘Contract for Equalities’ penned by May in 2010, the party pledged: “We will also consider the case for changing the law to allow civil partnerships to be called and classified as marriage.”

After May became Home Secretary in the Conservative-Lib Dem coalition government, she worked alongside Lib Dem Lynne Featherstone to secure agreement for equal marriage to proceed, after the proposals were left out of the initial coalition agreement.

Featherstone, the architect of the equal marriage law, later affirmed that May’s support was instrumental in convincing the Conservative leadership and the Cabinet to agree to move forward with equal marriage in England and Wales, which resulted in the 2013 Marriage (Same Sex Couples) Act.

In her book Equal Ever After, Featherstone praised the Home Secretary as an “unsung hero” of the push for marriage.

May was also key to ensuring that proposals allowed for religious same-sex weddings as well as civil weddings.

Despite her work on equal marriage, May came in for frequent criticism from LGBT groups while serving as Home Secretary from 2010 to 2016.

May was frequently criticised by asylum groups for the degrading treatment of LGBT+ asylum seekers, who fled homophobic persecution.

Under May’s tenure, LGBT+ asylum seekers were often subjected to humiliating ‘tests’ and ordered to go to bizarre lengths to ‘prove’ their sexuality.

May commissioned a review of the treatment of LGBT asylum seekers in 2014, but LGBT+ asylum groups said systemic failures persisted.

As Home Secretary May also mooted plans to withdraw from the European Convention of Human Rights, which guaranteed some of the UK’s earliest LGBT rights protections.

The Home Secretary ditched the “divisive” plan as she launched her leadership bid in 2016.

Theresa May took over from David Cameron as Prime Minister on July 13, 2016, in the wake of the Brexit referendum.

Although Brexit would consume much of her premiership, May also sought to forge a new consensus on LGBT+ rights.

The leader’s most significant intervention came on transgender rights.

Prime Minister Theresa May at the PinkNews Awards 2017.

Speaking at the PinkNews Awards in November 2017, she pledged: “We’ve set out plans to reform the Gender Recognition Act, streamlining and de-medicalising the process for changing gender, because being trans is not an illness and it shouldn’t be treated as such.”

The government launched a consultation on gender recognition laws in June 2018, aiming to streamline the process for trans people to gain legal recognition.

The consultation provoked a divided reaction, but May stuck behind the plan despite a concerted campaign from anti-transgender activists.

May’s decision to call a snap election in 2017 backfired, with the Conservative Party losing its majority in Parliament.

The Conservatives opted to enter a confidence-and-supply arrangement with Northern Ireland’s Democratic Unionist Party, an ultra-conservative party that is opposed to LGBT+ rights.

May insisted that the pact would not impact her government’s agenda on LGBT+ issues. In fact, in July 2017, May wrote an opinion piece for PinkNews to mark the 50th anniversary of decriminalisation of homosexuality in Britain.

In the piece, May reflected on the Conservative Party’s past hostility to LGBT+ rights, admitting the party had been “wrong” in the past.

However, the leader has been criticised for blocking progress on equal marriage in Northern Ireland.

Activists from Love Equality have said that the onus is on the UK government to ensure the ban on same-sex marriage in Northern Ireland is lifted, due to the ongoing suspension of devolved power-sharing in the region.

However, May has declined to act.

One of the most contentious elements of May’s record came in March 2018 when former Brexit campaigner Shahmir Sanni came forward to allege misconduct by the Vote Leave campaign.

The Downing Street press officeput out a briefing to media that cast Sanni, who was in the closet, as the bitter ex-boyfriend of May’s political secretary Stephen Parkinson.

Subsequent stories in the media outed Sanni as gay to the world, including to his family in Pakistan.

May flatly rejected calls to sack Parkinson over the ‘outing’ scandal.

“I of course recognise the importance of ensuring that we do recognise that for some, being outed as gay is difficult because of their family and circumstances. What I want to see is a world where everyone is able to be confident in their sexuality and doesn’t have to worry about such things.”

In June 2018, the government issued new draft guidance for the teaching of Relationships and Sex Education (RSE), which will become compulsory in all schools across the country from September 2020.

The guidance, which was last updated in 2000, has been significantly re-written to include teaching about same-sex relationships and gender identity, as well as issues relating to consent and staying safe online.

Under the proposals, relationships education in primary schools would provide children with the basic understanding of diverse structure of families and the types of relationships they are likely to encounter.

The draft guidance states: “By the end of primary school, pupils should know that others’ families, either in school or in the wider world, sometimes look different from their family, but that they should respect those differences and know that other children’s families are also characterised by love and care for them.”

The guidance for secondary schools adds: “Pupils should be taught the facts and the law about sex, sexuality, sexual health and gender identity in an age-appropriate and inclusive way.”

May has a mixed record on LGBT+ rights around the world.

She continued to pursue a close relationship with Saudi Arabia, where gay people can be put to death, and also shied away from criticising US President Donald Trump when he launched broadsides against transgender people.

However, at the Commonwealth Heads of Government Meeting in April 2018, she urged countries to back LGBT+ rights and said that the UK “deeply regrets” its legacy on colonial anti-gay laws.

May said: “As the United Kingdom’s Prime Minister, I deeply regret the fact that such laws were introduced, and the legacy of discrimination, violence and even death that persists today.

“Nobody should face discrimination or persecution because of who they are or who they love.”

She added: “The UK stands ready to support any Commonwealth member wanting to reform outdated legislation that makes such discrimination possible, because the world has changed.

Tony Blair’s Labour government introduced civil partnerships in 2004 as a segregated form of union for same-sex couples, separate from marriage.

May said: “This change in the law helps protect the interests of opposite-sex couples who want to commit, want to formalise their relationship but don’t necessarily want to get married.

“As Home Secretary, I was proud to sponsor the legislation that created equal marriage. Now, by extending civil partnerships, we are making sure that all couples, be they same-sex or opposite-sex, are given the same choices in life.”