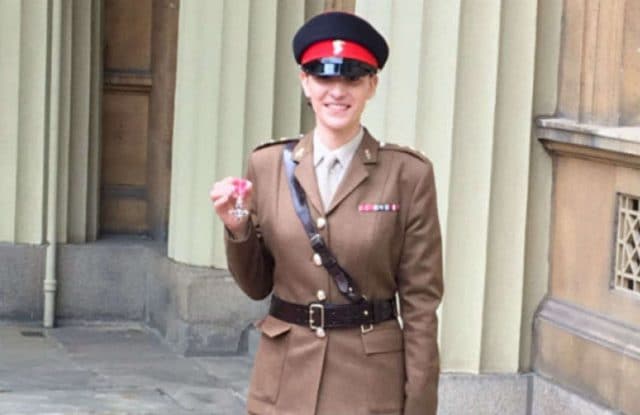 Prince William has honored an army veteran Hannah Graf with a MBE.

She rose to become the highest ranking trans woman in the British army.

The 32-year-old, who lives in London, attended yesterday’s ceremony with husband and trans filmmaker Jake.

She said she was ‘amazed’ in a statement issued to Gay Star News.

‘If I could go back and tell my younger self seven years ago when I was wondering whether transitioning was the right thing to do, that I’d be given an MBE by Prince William at Buckingham Palace, I’d have been amazed.

‘Young transgender people often have a lot of fear which holds them back. I’m proud to be a role model to them through my work with Mermaids.

‘I think it’s great for any person in a position of power to recognize transgender people… For the Royal family to show me their support is very powerful at a time when there’s so much misinformation, fear and hatred towards us.

‘People with influence making the world better is an incredible thing, whether it’s royalty or politicians, journalists, your boss at work or your mum and dad.

‘Trans people have always existed and now we’re more open than we’ve ever been. All we’re asking for is the same recognition as everyone else. In some small way, I feel like my MBE is an example of that.

‘It gives me hope that the future is going to be safer, stronger and less judgmental for the kids and parents I’ve met at Mermaids.’

Last month, Mermaids launched a after receiving a lottery grant.

If you’re experiencing a personal crisis, are unable to cope and need support, just text Mermaids to 85258.