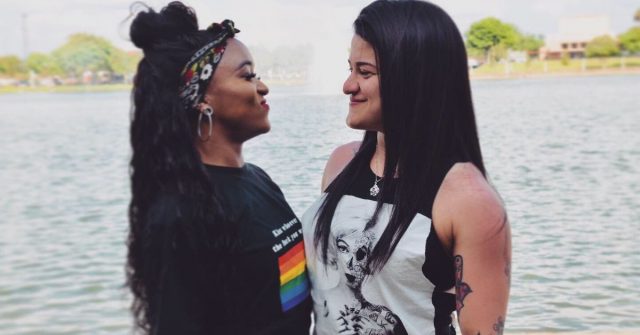 A beautifully worded message of love accompanied the pictures of the adorable couple.

“When I’m with you, I act different. In a good way. I smile more and I laugh more. I don’t have to pretend everything is ok when it’s really not. With you, I can drop the fake smile and put on a real one. I don’t feel hurt and alone when I’m with you. You’re easy to talk to, you listen to me, you understand me. I don’t have to worry about holding back with you. I don’t feel self conscious. I don’t ever feel insecure or sad, you show me that you really do care. With you it’s not just an act. You bring out my best self and I really appreciate your company. With you I’m different. With you I’m happy. What I have with you, I don’t want that with anyone else.”

The announcement comes weeks after Hogan came out publicly as a member of the LGBTQ community in an Instagram post on the final day of Pride Month, highlighting her struggle to accept and be proud of herself. It was the last in a series of Pride Month posts, most notably one with Hogan posing in a “Support LGBTQ Wrestling” shirt.

“This year alone, I’ve become so much stronger and more confident just by having Pride in who I am. Unapologetic. This year I vowed to myself that I was going to be unapologetically me,” Hogan wrote.

On this final day of Pride month, I first want to start by saying, look how far we’ve come. Growing up I was bullied and having my life threatened just for being me. I WAS scarred from it, still kind of am at 24 years old, but that’s how much it scarred me. This year alone, I’ve become so much stronger and more confident just by having Pride in who I am. Unapologetic. This year I vowed to myself that I was going to be unapologetically me. To be happy with who I am, to be accepting of who I am and being proud of who I am in every way. I’ve always hidden parts of myself because I was scared of how it would be taken or if I would be ridiculed and shamed for it. I finally found my voice and faced my fear to just be accepting of me. This season on @wowsuperheroes I go more depth about my life obstacles and how they never stoped me only added fuel to my fire to make me the passionate woman I am today. I could go on and on writing my feelings down but I do want to say thank you. To the people in my life that have inspired me. My baby cousin Daven (@shescreamdav ),just left for boot camp to join the Navy, I couldn’t be more proud, but she alone has been one of my biggest inspirations because she’s always been true to herself. In the end I just want to leave you with this, accept yourself for who you are, live life to the fullest, follow your dreams and reach for the stars just stay focused, be determined, stay passionate and mostly importantly be happy.❤️ @modernmyth @aliciathenaildoctor @rawhairdontcare #girlonfire #pridemonth #pride #lastdayofpridemonth #beyourself #findyourvoice

Diamante, who wrestles for various independent promotions (and rocks the occasional Mileena cosplay), hasn’t been as vocal as her partner regarding sexual identity. Going public with her relationship with Hogan looks to be her first public acknowledgement of her LGBTQ status.

But a Twitter exchange one day prior to their announcement alluded to their relationship in the cutest way. Hogan’s declaration of love for her “big spoon” elicited a reply from Diamante depicting an otter cuddling a stuffed animal.

As wrestling Twitter and Instagram celebrate, Hogan and Diamante prepare to take their relationship to the next level: in-ring co-workers. Both wrestlers have signed with WOW Women of Wrestling, an all-female promotion crafted by GLOW mastermind David McClane. Diamante will join the company during its next season, wrestling under the name Adrenaline. Hogan currently wrestles as Fire for the company.

For now, though, the two can rest happy knowing they can live their truth and express their love openly. “We just are so happy with each [other] we wanted to share our love and happiness with the world and not hide it anymore,” Hogan said.