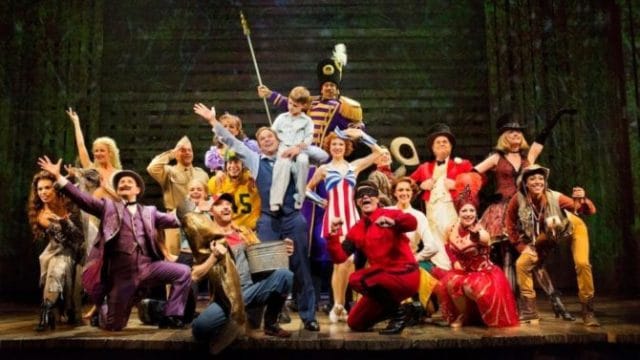 In classic putting-a-fire-out-with-gasoline fashion, a “family friendly” community theater halted production of the musical Big Fish after a dispute with the director over a scene featuring two gay dads as extras.

During the song “Stronger,” the show’s protagonist, Will Bloom, delves into his relationship with his father as he faces becoming one himself.

As part of the “bustling park scene,” Nemec decided to include two gay dads holding a baby.

That is the extent of the “controversy.”

The producers at the Palisade Playhouse in Pittsburgh, Pennsylvania, initially approved the decision but changed their minds once they saw it in rehearsal. They said the characters had to go, which led the director to resign in protest, along with several actors.

In a statement posted to the theater’s Facebook page, founders Matt and Michelle Belliston explained their fear that the brief moment would “exclude” some audience members:

“In an effort to show genuine acceptance and welcome all, an initial compromise had been made upfront to include two gay fathers holding a baby and walking across stage as part of a scene with a bustling park setting. The direction shifted with blocking and scene direction that would have created an additional moment of reflection between the lead character and the gay parents during an emotionally charged song about the feelings of becoming a father for the first time. This added moment of focus created question about whether the director’s addition would convey a message about gay marriage in a way that would be seen as inclusive to some but exclusive to others.”

They also said they “grieve” because of the backlash the decision inspired:

“Palisade Playhouse’s founders grieve with those who feel hurt by this decision, but also grieve because of the intolerance and the spite with which they were treated as well. Palisade Playhouse remains true to its founding ideals, and for that reason, Palisade maintains the need as an organization to maintain a level of neutrality on this issue and many other issues, so that all people may feel welcome.”

“You are actually complaining that YOU were the ones facing intolerance?” asked one justifiably incredulous commenter.

The show was canceled altogether and the Bellistons hoped the drama was squarely behind them.

And it was, until the musical’s big-name composer, Andrew Lippa, and writer, John August, heard what had happened.

They released a statement of their own to Deadline:

“This week we learned that an upcoming production of BIG FISH at the Palisade Playhouse in Pittsburgh has been canceled over a disagreement between the director and the theatre. Specifically, the director planned to include a same-sex couple as part of the background action during the song “Stranger.”

In defending their decision, the theatre argues that, “the script did not include any reference to the LGBT+ community.” That’s correct; nowhere in the script does it say that any character is gay or lesbian or trans. But nor does it say they aren’t. A director’s decision to signal that two silent characters are same-sex parents isn’t changing the text. It’s providing context and framing. It’s directing.

BIG FISH is a musical about parenthood, family and love. These are shared experiences of all human beings.

The theatre continues: “This added moment of focus created questions about whether the director’s addition would convey a message about gay marriage in a way that would be seen as inclusive to some but exclusive to others.”

Which feels another way of saying, “We didn’t want to risk offending anyone.”

And look, we get it. BIG FISH has been produced hundreds of times in the U.S. in part because it’s so family-friendly and unlikely to offend. There’s no sex or violence. In some cases, we will allow for words to be changed or omitted. We do this because we want as many people as possible to get to experience it – both as an audience and as part of a production.

But “family-friendly” shouldn’t mean ignoring reality. Let’s remember that in America there are all kinds of families, including ones with two dads, two moms, people of all gender identity, color and creed. Family-friendly is something bigger than it once was.

This notion of “thinking bigger” is something Big Fish’s hero Edward Bloom would certainly endorse. After all, his friends include a giant, a witch and a werewolf.

When we see #bigfishmusical videos on Instagram of high schools doing “Be The Hero,” it reminds us that the show we wrote inevitably changes with every production, every player, every choice. That’s theater. It exists only because people come together to put on a show.

We’re sorry the show won’t go on at Palisade Playhouse, but look forward to working with the director and company to find a new home for their production.”