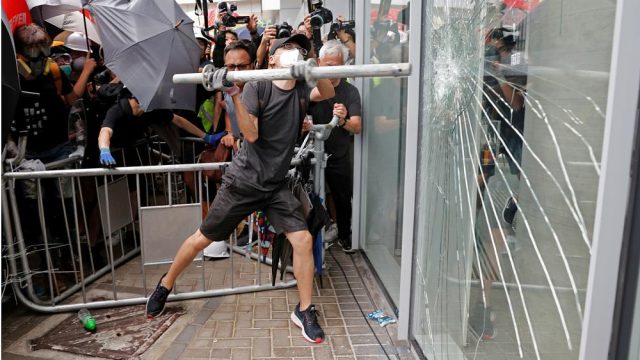 Protests in Hong Kong marking the anniversary of the city’s handover to Chinese rule turned violent as demonstrators clashed with police and tried to break into a government building.

Police fired pepper spray to disperse the protest ahead of a flag raising ceremony in the city, while demonstrators responded by raising the Hong Kong flag and a black flag at half mast.

Monday marked the 22nd anniversary of China’s takeover of the former British colony, which comes at a time of particular turmoil with the mainland.

More than a million people have taken part in protests in Hong Kong in the last three weeks against a proposed extradition bill that would see suspected criminals be taken to the mainland to face trial.

Activists argue that this process could be abused by the Beijing government in order to make its critics “disappear”.

Hong Kong leader Carrie Lam, who has faced calls to step down, eventually suspended the bill, but has not scrapped it.

Appearing in public on Monday for the first time in two weeks, the embattled leader promised to do more to listen to public sentiment.

She said: “The incident that happened in recent months has led to controversies and disputes between the public and the government.”

“After this incident, I will learn the lesson and ensure that the government’s future work will be closer and more responsive to the aspirations, sentiments and opinions of the community.”

In a statement, British foreign secretary Jeremy Hunt emphasised the importance of upholding a “One Country, Two Systems” principle between China and the autonomous state.

“It is imperative that Hong Kong’s high degree of autonomy, and the rights and freedoms of the Hong Kong people, are fully respected in line with the Joint Declaration and the Hong Kong Basic Law,” he said.

“We have made our position on this clear to the Chinese Government, both publicly and in private, and will continue to do so.”