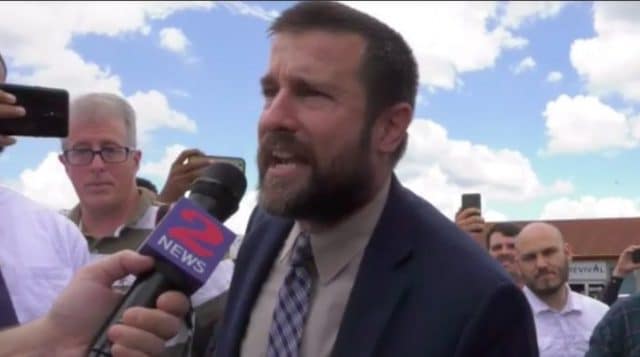 This weekend, hate pastors in Orlando, Florida are holding a three-day “Make America Straight Again” conference around the third anniversary of the Pulse nightclub shooting. In response, over 150 LGBTQ and allied protestors picketed the Revival Baptist Church of Orlando whose leader helped organize the conference.

The actual conference is being held in an undisclosed location but is being streamed on YouTube.

Truth Wins Out (TWO), a non-profit organization that fights anti- LGBT religious extremism, recorded interviews with the protestors and attending hate pastor Steven Anderson, a man who praised the Pulse nightclub shooter for killing “a bunch of disgusting perverts and pedophiles” and “disgusting homosexuals who the Bible says were worthy of death.”

“I’m totally non-violent. It’s a spiritual battle. Okay? It’s words that I’m speaking. I wish that every homo would die. I want my children to live in a country where they don’t have to look at these freaks every day and have their eyes corrupted. They’re defiling everybody by showing us this filth and corrupting everybody. They make these stupid distinctions — LGBT — it’s all one category: sodomites.”

Later, Anderson told the counter-protestors, “Sorry freaks, I’ve got to go. Get AIDS and die.”

Of course, Anderson — who has been banned from over 30 world countries for his hate speech — is just one of several hate pastors attending the conference. Also scheduled to appear were Sacramento-based preacher Roger Jimenez who in 2016 said of the Pulse shooting, “Are you sad that 50 pedophiles were killed today?”

Also attending are Tommy McMurtry who once said “homos” should be “put in their place: six feet under,” and the head organizer pastor Patrick Boyle who said, “God hates homos. Amen. God hates the f*ggots and the queers and the LGBT crowd.”

Before this weekend’s event began, McMutry said, “Pray that if they do any protests, that it gets violent. They have Stand Your Ground in Florida. So we’re allowed to fight back.”