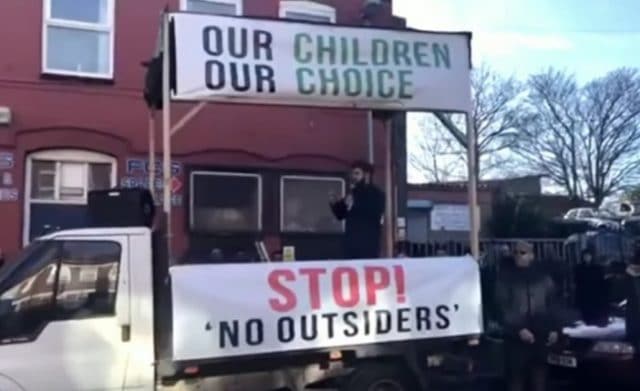 Teachers are “in tears” after over a month of protests outside an elementary school over LGBTQ curriculum, according to a lawyer who is trying to mediate the situation.

For months now, protestors have been marching in front of the Anderton Park Primary School in Birmingham, UK.

At issue is the school’s diversity curriculum, called “No Outsiders.” Developed by Andrew Moffat, the curriculum teaches kids about different kinds of people and families in order to bring schools into compliance with the UK’s Equality Act of 2010.

The mainly Muslim protestors have claimed that the kids are too young to learn that LGBTQ people exist. Some carry signs that say “Our children, our choice,” “Let kids be kids,” and “Don’t class us as homophobic.”

Nazir Afzal, a former prosecutor, was brought in to help mediate between parents, teachers, and the city council. But he said that he has been hearing so much misinformation that he had to talk to Sky News, a far-right media organization that’s similar to Fox News in the US.

“I can’t think of any other way to get people round a table again than to speak to you and Sky,” Afzal said.

“I’ve seen people walking around outside of that school with stuff that they have downloaded from the internet suggesting this is on the curriculum. This is what’s being taught to their children. It’s a lie. And this is what I’m dealing with.”

Around 60 parents met with the director of the school to talk about the curriculum, but hundreds more refuse to attend a meeting.

Afzal said that there are people who are participating in the protests who don’t even have children at the school.

“I’ve seen dozens and dozens of men invariably, outside that school, coming straight from the mosque, for example, or from whatever place of worship, who have no place to be there,” he said. “What the hell are they doing outside screaming at five year olds? What are they doing?”

He may have been referring to Shakeel Afsar, one of the leaders of the protests, who doesn’t have a kid in the school. Afsar said that they will keep on going until he gets “transparent, sensible talks.”

“Sit us down, sit the LGBT community down, and let’s thrash this out like adults and stop being so intolerant to the community that have different views to yourself,” he told the BBC.

Activist Khakan Qureshi, who runs a support group for LGBTQ Muslims in Birmingham, said that he met with Afsar and that the anti-LGBTQ protestor “loves the attention” that comes with leading the protestors.

“He says he’s not homophobic but said he will campaign for this nationwide… he wants to abolish LGBT education,” Qureshi said. “There are LGBT people in the Muslim community and we want representation.”

Education about relationships will be mandatory in the UK starting in September, 2020, but Afzal said that part of the problem is that the government never said what the curriculum had to look like, instead leaving that discussion for local governments and individual schools.

“The government need to mandate what needs to happen around relationship education,” he said. “What should be the curriculum, not just simply leave it for local interpretation because this is what will happen.”

Owen Jones of The Guardian talked to people in Birmingham about the protests last month.

The BBC also took a closer look at the controversy.