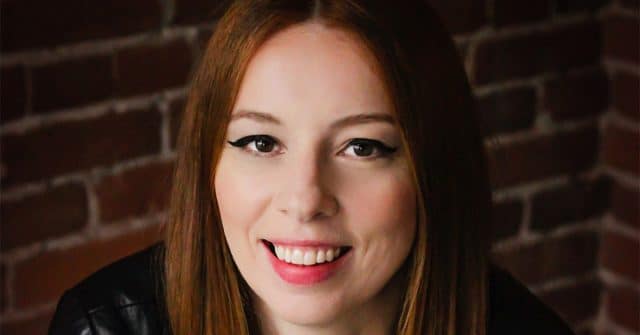 Prominent Canadian anti-trans feminist Meghan Murphy spoke at the Scottish Parliament last night, as protestors gathered outside to object to her controversial views on transgender rights.

Murphy, 39, was invited to speak at the Scottish Parliament by Scottish National Party MP Joan McAlpine.

McAlpine came under fire earlier this month for asking Murphy, a vocal opponent of trans rights, to speak about “women’s rights and the transgender debate.”

Sisters Uncut Edinburgh, the intersectional feminist direct-action group that organised the protest, told PinkNews, “Our protest was designed to provide a platform for voices that are not being heard in the Scottish Parliament or in the mainstream media. We have had enough of trans women being used as a scapegoat for issues that are really the consequences of living in a patriarchal society.”

“Our protest was an encouraging, accommodating and safe environment for people to share very raw and personal stories about the reality of women’s (trans and cis) and non-binary people’s rights in Scotland today.”

“We were not at parliament yesterday to change her mind but to challenge her bigoted ideology by speaking about how real lives are affected by it,” they said.

The rally included a range of talks from different speakers covering women’s rights and the rights of survivors of domestic and gender-based violence in Scotland.

Scotland is currently deciding whether to implement new laws allowing trans people to self-identify their gender. This comes after a landmark public consultation carried out by the Scottish Government in 2018, which found that three in five Scots back new laws allowing people to self-identify their gender, and 62 per cent think Scotland should take action to recognise a third, non-binary gender.

Murphy last night (May 22) urged Scottish policymakers not to bring in new any laws allowing people to self-identify their gender, according to The Times.

“I think we do need to protect everyone from being discriminated against, but we don’t need to say that trans-identifying males are literally female to protect them from discrimination,” she said.

Ahead of Murphy’s talk at Holyrood, McAlpine said she was “delighted” that Murphy would speak.

“I am delighted that Meghan is coming to discuss the Canadian experience of allowing males to self-identify as women and access single-sex spaces and services,” she said.

Murphy is the founder of the radical feminist blog Feminist Current and is currently banned from Twitter for “hateful conduct.”