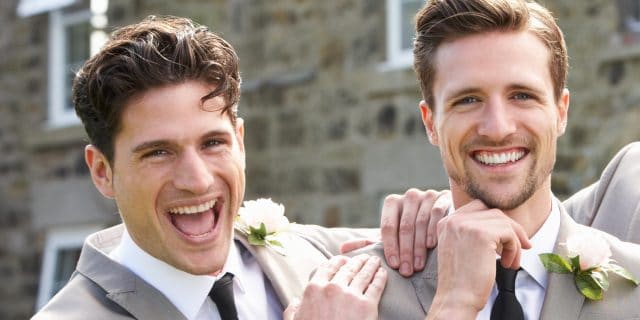 Are We So Much Different After All?

Ken Howard, a Psychotherapist specializing in gay men’s mental health, took his expertise to the Huffington Post. He compares the differences between heterosexual and homosexual couples. His research is thorough and blunt.

According to Huffington Post, Howard breaks down his twenty-four years of research into ten key differences between the straight and gay couples he’s counseled. In the written article, he stresses that this is from his perspective. Below are his discoveries on why gay couples differ from their straight counterparts that have been broken down to ten categories: Money, Kids, Family, Sex, Fun, Stimuli, Politics, Household Chores, Sex, and Work. I’ve cut down his extensive research for you to have a quick read!

“Gay male couples can have a lot of conflict around money. Statistically, white men tend to be relatively high earners. It’s hard to find a gay male couple where issues of competition don’t come up, whether regarding physical appearance, social influence, or income. When money issues arise in gay male relationships, I believe it’s because all American men (and elsewhere) are still, even in our oh-so-modern times, expected to the “breadwinners.” It’s like some kind of pissing contest. There can also be an irony that the older, higher-earning partner can be the sexual bottom role in the relationship, and it’s in the bedroom where issues of power, control, and dominance can be “played with,” reversed, or expressed. In every gay male relationship, there is overt power, and there is covert or “passive-aggressive” power.”

“Gay male couples tend to approach sex differently. We all know that gay male couples are much more likely to entertain the idea of, or even be in, a non-monogamous relationship. Part of this is cultural and historical; part of this is the nature of men’s sexuality in general (hey, truth be told, MANY more straight men would be non-monogamous if given the opportunity by their wives, as I have learned from working with straight men in my practice, and some (just like gay men) take that prerogative even if it’s directly violating a monogamy agreement). Gay men are much more likely, in general, to only “not” be appalled at the idea of another person (man) having sex with their partner/spouse, but to be turned on by it. Gay men have a greater capacity (in general) for “sport sex,” and less about foreplay; they can separate sex from love more easily.”

“When two gay men form a relationship and have a domestic component to their lives, there can be friction about who does what, and who is “expected” to do what. There are no “traditional” gender roles to point everyone in the “right” (I mean that facetiously) direction. The key to this in counseling is often “what ‘feels’ fair” in a concept where both partners are expected (somehow) to be making a very subjective “equal contribution” to the relationship. In my own relationship (now marriage, since 2008), I’ve found that there are certain chores that each of us both likes to do more, and can do better, and it roughly falls into a 50/50 split. One man’s tedium is another man’s relatively happy task. The challenge is trying to achieve a sense of “fairness” without one partner feeling humiliated by too much “domesticity,” which can be seen as an emasculinization.”

“Gay male relationships where there is a parenting factor involved differ from straight relationships mostly in that same-sex parenting needs extra support. There is also no such thing as “accidental” pregnancy and parenthood in a gay male relationship. And, a discussion of “gender roles” in terms of responsibilities and chores comes into play. For gay fathers, there are no gender stereotypes to “guide the way,” so the division of duties has to be discussed from automatically a more socially autonomous standpoint.”

“In gay male relationships, the role of one of the male partners in taking care of aging parents can be an issue. But in family relationships with the “in-laws” in a gay male relationship, there can sometimes (not always) be differences in how the in-laws react to “the gay thing.” While some in-laws can be hostile to the man or woman their family member marries, the stakes are higher for gay male relationships because there just seems to be at least one serious homophobe in every family. Gay men in relationships are called upon, in general, more often to set limits and confront any overtly or subtly hostile behavior toward their partner/spouse.”

“In gay male relationships, it seems to be more accepted, overall, that work often “has to come first.” Busy male executives have been socialized that it just “comes with the job” to work later nights, weekends, or even on vacations. I also have observed and believe that sometimes gay men in relationships capitulate to work/bosses and give more of their time than straight husbands and fathers do, which can be a very (very!) subtle form of internalized homophobia, where a gay male will fail to set limits with work, but a straight father will set limits on leaving a meeting early to be at his kid’s school play that evening or to meet his wife for an anniversary dinner.”

“Fortunately, one huge and consistent benefit I have observed in gay male relationships over straight ones is that gay couples consistently demonstrate a youthfulness, playfulness, and sense of fun, especially with peers but also alone with each other. Dancing in clubs, going on gay cruises, having sexual three-ways, attending charitable events, experiencing dining adventures, celebrating birthdays/anniversaries in creative ways, elite athleticism, indulging pets, doing pristine home improvements, world travel, and exploring nature are just some examples. While this is common to affluent gay male couples, even middle class or working class gay couples seem to have an extra sense of discovering fun, creative pastimes. Some of this could be just the economic privilege that comes with dual “male” salaries and no kids.”

“Similar to the above “fun” element, even if sometimes considered “age-inappropriate,” gay male couples often have a more liberal approach to things that stimulate and challenge them, particularly physically. This can even include substances of all kinds – mostly alcohol, but also recreational drugs or even exotic foods or “trendy” diets. [Gay Men] can go through all the soul-searching and challenging societal “expectations” enough to come out when we are young, we can never again approach much of anything without the ability to examine it very critically, and weighing the risks and benefits of just about anything.”

“Gay men have an inherent sense of “male competition” when it comes to physical appearance, like the preening male peacock or even the “Adonis complex.” While two gay men might love one another in their relationship, they will still subtly compete with one another to others, like most males in the animal kingdom. How many times have we seen gay community examples where one partner “has the money” and the other partner “has the looks”? This can be a certain mutual benefit, but it can also be a source of competition or even resentment of what the other has that he lacks. We want to make ourselves attractive to each other, but we also tend to want to be recognized and admired in our own right by others. This can at times be unhealthy, but there is such a thing as a reasonable or “healthy narcissism.” For gay male couples, loving and accepting the self individually and in context of each other, and society at large, can be a challenge.”

“I think gay male couples are just simply more affected by politics, changes in laws, and changes in society than straight couples are. We hear in the news almost every day something that could potentially change our legal status, and straight couples don’t tend to be affected by laws almost daily like that. Every state that legally embraces marriage equality affects gay couples in that state positively, while other states that (to this day, even after the Supreme Court ruling) fight tooth and nail to undermine and de-legitimize same-sex marriages, up to and including the “religious freedom” right to discriminate, affect gay couples negatively. When we watch the evening news, or read news outlets online, they are often talking about us as gay men. Most straight couples do not wake up every day to the news of some idiot Republican politician or religious conservative (usually “Christian”) pundit calling them vile names and advocating for their legal and social demise, and we do. It’s a wonder gay male relationships form in the first place, let alone endure, and happily.”